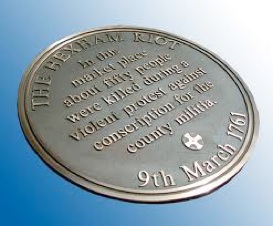 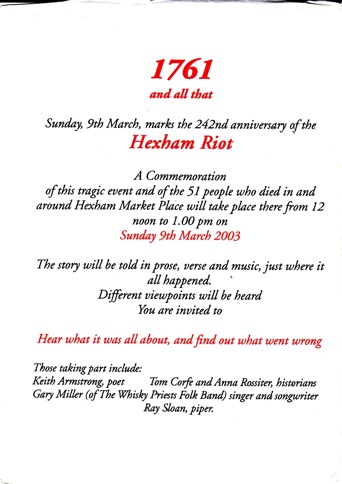 ‘The Market Place was a tragic sight. Bodies of the dead and wounded lay scattered. The ground was stained with blood and the cries of the wounded were pitiful. The following day it rained, washing away the traces.’

Wash away the day,

wash the pain away,

sweep the remains of yesterday

into the racing river.

and cry me a river,

cry the Water of Tyne.

Wash away the day

and wash this pain away.

With blood gushing out of his boot tops,

Thirteen men lie inside the Abbey,

Numbers are found dead upon the roads.

the musket ball found in the child’s belly.

Thrice into a man’s body

it’s said they ran theIr bayonets;

and a pitman dead,

all those broken days of history,

all the slain hours in our diaries.

Let them toll the severed minutes.

the end of torture.

in this Heart of All England,

are swept clean of blood.

But the stains still soak our books.

we turn the pages;

in between the lines,

we read about the screams,

There is terror lurking in this Market Place,

just scrape away the skin

It is a Riot of gore, 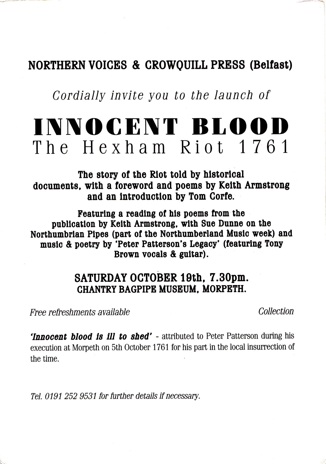 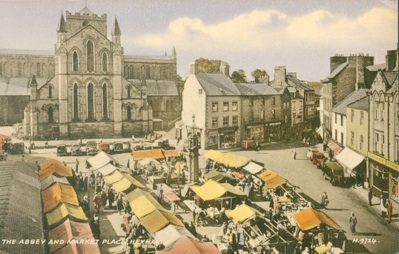 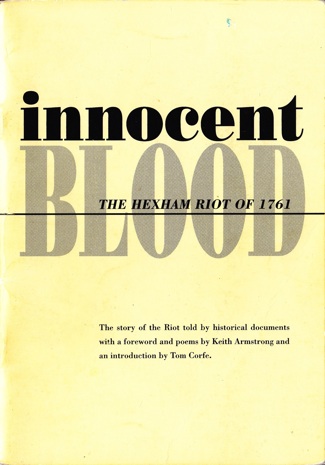 Known as Bloody Monday, the Hexham Riot, which broke out on March 9th 1761, was the outcome of an attempt to introduce a system of balloting for the militia. Balloting met with opposition throughout the north of England but it was in Hexhamshire that feelings ran highest. The local magistrates, well aware of this, had taken the precaution of bringing a detachment of the North Yorkshire Militia into the town of Hexham. Drawn up in the square in front of the Moot Hall, these soldiers only served to increase the fury of the mob that gathered on the day of the ballot. After almost four hours of argument between ringleaders and magistrates, the Riot Act was read.

The crowd broke loose and advanced with staves and clubs upon the charged bayonets. Two soldiers were shot by their own weapons and the magistrates, in panic ordered general fire. By the time the firing ceased, the crowd had fled through the streets, leaving only dead and severely wounded - a sight that seemed to move even the soldiers. Various figures have been advanced for these fatalities - some sources quotes 51 dead and others give 45 dead, with some 300 wounded but it is likely that the latter figure was somewhat higher, for large numbers escaped to their own locality and were naturally unwilling to acknowledge their part in the affray.
Posted by keith armstrong at 1:58 pm
Newer Post Older Post Home