TWO poets from the North East, Newcastle's Keith Armstrong (the 'Gingling Geordie') and Middlesbrough's Trev Teasdel, are performing on Tuesday at Spoken Word Antics, where they last appeared in November 2005.
Back then they were the first guest writers to appear at Antics, which has since seen writers from all over the country and as far afield as Canada and the United States coming to entertain audiences in the Red Deer, alongside an eclectic mix of Sheffield poets and performers in the open mic.

Keith Armstrong is a warm, engaging performer whose poetry conveys a strong flavour of Northumbria's life and landscape. One of his more unusual projects involved touring the Northumbrian coastline with the Berlin sculptor Rolf Wojciechowski, who laid out his giant word forms on the sand for the tide to wash over while Armstrong declared his poetry to the assembled crowd through a megaphone on the beach. He has also toured with folk rock band The Whisky Priests.

In addition to his own work Armstrong organised events and projects such as Northern Voices, a creative writing and community publishing project which specialises in recording the experiences of people in the North East to promote poetry to the wider public.

Trev Teasdel is an underground performance poet, as well as a musician and former band member of the Collective Unconscious. He also runs Stockton-on-Tees's Writers Cafe.

The evening in the upstairs room at the Red Deer will also include open mic slots for any kind of spoken word, poetry, stories, dramatic monologues, or others. 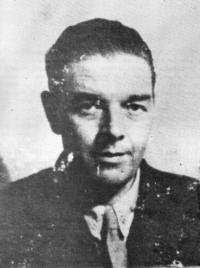 A CELEBRATION TO HONOUR HIS LIFE & WORK

Jack Common was born in Heaton, Newcastle upon Tyne in 1903. His father worked at the locomotive works close to the family house in Heaton. He attended Chillingham Road Council School, where he excelled at essay writing, but left at fourteen to attend commercial college and to work in a solicitor's office. Years of indifferent jobs and unemployment led him to move to London in 1928, partly to foster his political convictions and also to escape unemployment in the north. In 1930 he commenced work as a circulation promoter on The Adelphi, a socialist journal edited by John Middleton Murry, Richard Rees and Max Plowman. He was soon employed as assistant editor and took over editorship for a period in the 1930's. Common was a contributor to The Adelphi and other journals such as New Britain, The Aryan path and The New Statesman and Nation, but it was The Adelphi which occupied most of his time during the thirties; writing political and social articles, book reviews, a column called "The Sweeper Up" and helping to shape policy and direction by working with the three editors. George Orwell was another contributor to the journal and it was through their working relationship on the journal that they formed a close friendship.

In 1939 The Adelphi was put out of print and Common sought work as a film script writer and editor for government documentary films and lived in Langham, Essex at the Adelphi Centre, a community set up in 1936. After the war he found more film work with Rank Studios as a script advisor and reporter on suitability of novels as film subjects. He also worked as a freelance for the Associated British Picture Corporation during the 1950s and 1960s, again writing and editing scripts.

In terms of his published work there are two phases to his work, the political and socially conscious essays of the 1930s and the fictional work of the 1950s, which reflect the work he was undertaking at these times.

In 1938 he published Seven Shifts, a collection of seven working men's tales of work which Common edited and introduced. In the same year he published a book of social and political essays The Freedom of the Streets. Kiddar's Luck, the fictionalised autobiography of Jack Common's life up to the age of fourteen, published in 1951, was written under conditions of great hardship. Whilst writing the book he worked as a labourer during the day and wrote and edited film scripts in the evening, using the weekends to write his novel. He was under similar financial pressure when writing The Ampersand, a further autobiographical novel, in 1953-4; despite the favourable reviews given to Kiddar's Luck, the publishers became bankrupt, leaving him without a publisher to market the books and ensuring that the book was not the financial success it should have been.

He also produced many articles for contemporary journals and magazines.

He died in Newport Pagnell on 20th January 1968 before he could complete his third novel.
Posted by keith armstrong at 12:18 pm 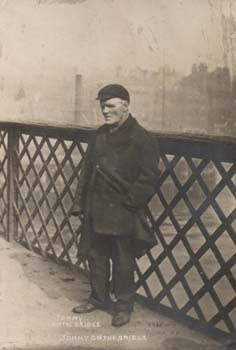 TOMMY ON THE BRIDGE*

You were a miner’s son,
blinded
in the fertile seam they dragged you from
to beg out your time
on the backs of bridges
that joined others
but left you split,
splay-footed between rough stones
and the snapping tomes
of the Law of the Land
and the Water.

Your wore a casual cloth cap
that muffled your bruised head.
Your trousers sagging at your feet,
you filled that dingy trench coat of yours
reluctantly;
resigned to see life life through,
with only coins for eyes
and a bridging loan to buy
derelict clothes.

At Swing or High Level,
you found a market;
a centrepoint for the rich
to lighten their swollen burden
of conscience a trifle.
And you ‘bored’ yourself
with a dignity that rejected buttons
and accepted only the silver linings
of fat pockets,
bred on a Victorian plenty
and plenty of paupers like you.

You buried your stubbled face
in the crowds that swam the Tyne.
Years across now,
you finally supped
your last cracked gill
of darkness.

And they picked you
neatly from the swollen gutter;
linked your broken hands at rest
to bridge
an empty chest.