armstrong in the new statesman


Just as Julia Darling's article praising Newcastle (The Back Half, 19 May) was going to press, another suicide fell from the Tyne Bridge. Quite a regular occurrence these days, but hushed up by the city fathers behind the European Capital of Culture bid. Darling is one of the cluster of arts professionals, in and out of the council's and the arts board's cat flaps, who have thrown in their lot with the quango executives and cultural businessmen behind the bid. Like Darling, many of them have acquired Tyneside roots because they have none of their own to speak of.
I remember Gary Chaplin, of the renowned north-east family that spawned the novelist Sid Chaplin, telling me that he felt like a cultural leper at arts meetings because he was invariably the only indigenous representative in attendance, drowned out by "third way", middle-class voices getting excited about Newcastle's "great creative potential".
In the 18th century, Newcastle was a significant provincial publishing centre, with republicans such as the wood engraver Thomas Bewick and the political dissident Thomas Spence plying their wares around its nooks and crannies. Darling is obviously largely unaware of the dissident socialist republican Geordie tradition, which would not touch the media hype surrounding the "Newcastle/Gateshead - buzzin'" campaign with a stotty cake.
If she were sincere in her desire to liberate the Geordies from the grime of the past, she might move over and let a real indigenous writer speak in your columns. That might convince the judges that the Capital of Culture bid was indeed rooted in the community - and not just an artificial construct imposed from on high by people who prostrate themselves at the feet of capital in their yearning for a new Hilton on the banks of the Tyne and for more call-centres, as our once-proud manufacturing base continues to be shat upon.
On Tyneside, we are submerged in a tide of "culture" at the moment, backed by totally uncritical local media that worship the arse off Antony Gormley but haven't a clue what is good, bad or just plain indifferent any more. The sooner we face reality, the better. Newcastle is not Barcelona - it is beautiful, shitty little Newcastle.
Keith Armstrong
Whitley Bay, Tyne and Wear
Posted by keith armstrong at 4:42 pm 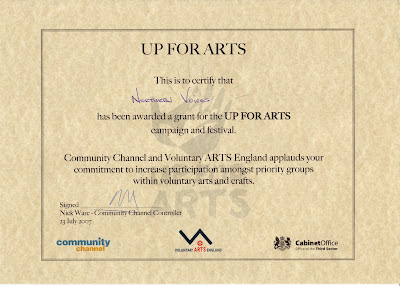 Posted by keith armstrong at 10:01 am

‘It’s up to you to react against Auden’s negative belief that ‘poetry makes nothing happen’, and to prove the opposite - that it changes the world every single moment with the tang of biting into a ripe orange.’

from a swahili phrasebook

There are strangers in the field.
There is a child at the door.
Thre are eggs in the basket.

Drunkenness takes away sense.
Trains go by every day.
Every year my father cultivates a field of rice.


The innovative Northern Voices creative writing and community publishing project has received a grant of £1000 from North Tyneside Town Centres Management towards a new project looking at a range of innovative community small businesses in Whitley Bay, North Shields and Wallsend.

A brochure and display will be produced, with features on each enterprise, including photographs, interviews and a poem on each small business by writer Keith Armstrong.


The North East creative writing and community publishing enterprise Northern Voices Community Projects has just received an Awards for All grant of £5150 for work on a touring show, display and publication on the poet Christopher Smart (1722-1771).
Smart's works include A Song to David and Jubilate Agno, both of which were at least partly written during his confinement in an insane asylum.
Smart was the son of Peter Smart, of an old north country family, and was born at Shipbourne, Kent. His father was steward for the Kentish estates of William, Viscount Vane, younger son of Lord Barnard of Raby Castle, Durham.
Christopher Smart received his first schooling at Maidstone, and then at Durham School. He spent part of his vacations at Raby Castle, and his gifts as a poet gained him the patronage of the Vane family.
His idiosyncratic Jubilate Agno was published in 1939 and has become relatively well-known. One section of the poem, beginning with "For I Will Consider My Cat Jeoffrey", has been reprinted separately and is popular among cat-lovers.

WORK FOR A POET

From The Wooden Doll,
I clock a ferry
cutting through The Tyne.
It speaks of distance,
smacks of seagulls
soaring over fresh fish,
the chips off the Old Shields’ block.
From this unique pub window,
you can smell Scandinavia,
hear Grieg whistle a folk tune
in the same breath as Lindisfarne.
A boat tugs at my roots,
brings out the wordy sailor in me.
I am a poetry boozer,
a staggering ship,
slopping my beer all over the Quay.
Why me?
Why am I the one
who draws the bird
stuck on Stan Laurel’s head?
I will scribble down another pint.
Tomorrow I will leave
for Oslo,
to find
more work for a poet,
and a different kind of drunk.

KEITH ARMSTRONG
Posted by keith armstrong at 9:33 am

‘SOUND CITY’ - CD REISSUE FROM ‘NORTHERN VOICES’
First released in 1991, with the aid of a Northern Arts grant, ‘Sound City’ is a newly reissued CD by prolific Tyneside poet Keith Armstrong, recorded with a string of top musicians - Rick Taylor, Bruce Arthur, Pete Challoner, Ian Carr, Bob Fox & Frank Gibbon - and digitally remastered by Dean Jones at The Old School House.
From Newcastle’s Dog Leap Stairs and across Europe to Moscow and Leningrad, the album is a travelogue in poetry, with the odd love anthems scattered in between.
Armstrong’s latest album ‘Out to Sea’, a poetic journey up the Northumbrian Coast, has been a great success aready and look out for further reissues in the pipleline due out for Xmas 2007 - ‘The Poetry of Percussion’, featuring Armstrong and Bruce Arthur, and ‘The Elvis Diaries’, the story of the life and times of Elvis Presley of Craghead, with poetry by Armstrong and Elvis songs by Durham’s Jim Nunn.
All albums can be ordered at £5 each (no postage required) from ‘NORTHERN VOICES’.
Northern Voices, 93 Woodburn Square, Whitley Lodge, Whitley Bay, Tyne & Wear NE26 3JD, England. Tel 0191 2529531. Email: k.armstrong643@btinternet.com
Posted by keith armstrong at 9:56 am 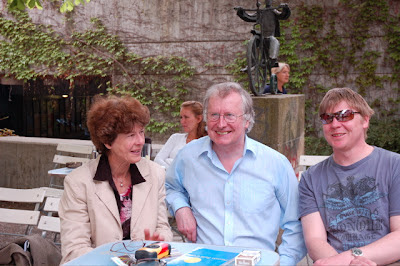