THE STREETS OF TYNE 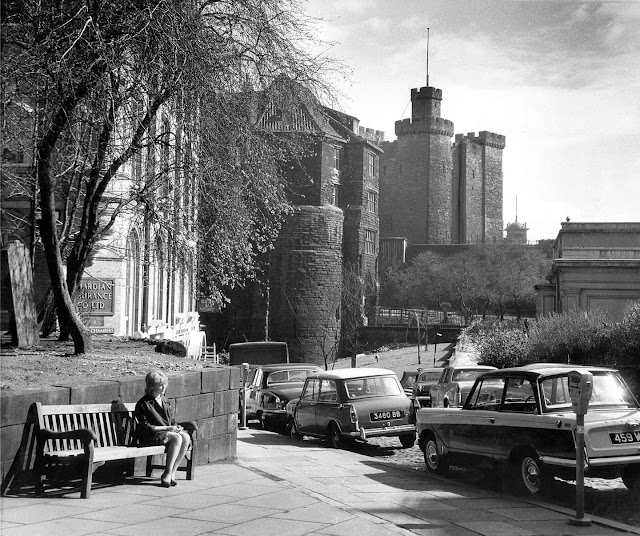 THE STREETS OF TYNE


I kicked out in Half Moon Yard,
bucked a rotten system.
Fell out with fools in All Hallows Lane
and grew up feeling loved.

She dragged my hand down Rabbit Banks Road,
there seemed nowhere else to take it.
We mucked about in Plummer Chare,
soaked up the painful rain.

Wild girls who blazed through Pipewell Gate
taught my veins to thrill.
I caught her heart on Pandon Bank,
my eyes filled up with fear.

Wanted to carve out a poem,
inspire the Garth Heads dreamers.
A lad grew up to dance along
the length of Pilgrim Street.

I take my wild hopes now to chance
the slope of Dog Leap Stairs.
Follow the pulse of my Tyneside days,
burn passion down The Side.
KEITH ARMSTRONG
Posted by keith armstrong at 7:05 pm

The partnership with County Durham and the City of Tuebingen in South Germany was established in 1969.
Poet Doctor Keith Armstrong, who gained his doctorate at the University on Durham in 2007, following on from Bachelor's and Master's degrees there, first visited Tuebingen in November 1987 to give readings and talks for a period of three weeks. Since then he has travelled to the city over 40 times and helped arrange for Durham and North East poets, musicians and artists and their counterparts in Tuebingen to visit their respective cultural twins.

TO HELP CELEBRATE THE 50TH ANNIVERSARY OF THE OFFICIAL TWINNING, KEITH RETURNED TO TUEBINGEN FROM JULY 3RD TO 7TH 2019 AT THE INVITATION OF THE CULTURAL OFFICE IN TUEBINGEN WHEN HE APPEARED AT THE BOOK FESTIVAL TO READ FROM HIS LATEST TUEBINGEN POETRY AND FROM THE  TUEBINGEN/DURHAM LITERARY ANTHOLOGY 'WORD SHARING'.
HE TRAVELLED WITH NORTHUMBRIAN PIPER CHRIS ORMSTON AND WAS JOINED BY TUEBINGEN PERFORMERS AND FRIENDS FOR THE OCCASION.

MOVING ON TO 2020, KEITH IS NOW WORKING ON A COLLABORATION WITH TUEBINGEN PHOTOGRAPHER ULRICH METZ.

ONE RESULT OF THIS IS KEITH'S 'CORONA POEMS' SEQUENCE - INSPIRED BY THE PHOTOGRAPHS OF ULRICH TAKEN DURING THE LOCKDOWN, AND ITS AFTERMATH, IN TUEBINGEN THIS YEAR.

A DISPLAY OF ULRICH'S PHOTOGRAPHS ALONGSIDE THOSE OF 8 OTHER PHOTOGRAPHERS COMMENCED ON SATURDAY OCTOBER 3RD AT 11AM IN TUEBINGEN'S HOLZMARKT WITH A GUIDED TOUR OF 23 STORE WINDOWS IN THE CITY WHERE THE PHOTOS, AND KEITH'S POETRY TEXTS, ARE FEATURED FOR A PERIOD OF 6 WEEKS.

AND DON'T FORGET THE UPDATED COLLECTION OF KEITH'S TUEBINGEN POEMS (1987 TO DATE), 'HERMANN HESSE IN THE GUTTER', IS NOW AVAILABLE AT £5 FROM NORTHERN VOICES COMMUNITY PROJECTS.

THE STORY SO FAR:

Keith returned to Tuebingen in September 2016 for readings of his poems inspired by his visits to Tuebingen over the years, including a literary promenade around the old town and along the Neckar accompanied by accordionist Peter Weiss.
He was also there in November 2017 with fellow poet Paul Summers and folk musician Gary Miller to attend the launch of a new anthology, Word Sharing, published by the Cultural Office in Tuebingen and edited by Carolyn Murphey Melchers and Michael Raffel in Tuebingen and Keith Armstrong in Durham to mark 30 years of the literary twinning between Tuebingen and Durham and featuring a selection of poetry by some 22 writers from Tuebingen and Durham.
The anthology had its Durham launch as part of a World Book Day event on Monday 23rd April 2018 at the University of Durham. Special guests at the event were writers Andrea Mittag and Matthias Kaiser from Tuebingen who read alongside Durham poets Jackie Litherland, Katrina Porteous, Paul Summers, Rob Walton and Keith Armstrong, with Durham folk music from Gary Miller and Mick Tyas - all in all, a memorable occasion with wine, poetry and song! Andrea and Matthias also appeared at specially arrranged seminars in the English and German Departments of the University of Durham.

Looking further back, a special celebration of the literary/arts links between the cultural partners was held on May 17th 2015 at Tuebingen’s Club Voltaire as part of the Tuebingen Buecherfest.  This was arranged by poet Tibor Schneider, Michael Raffel of the Buecherfest and Doctor Armstrong. Those featured included Gary Miller, singer/songwriter from Durham band ‘The Whisky Priests’, poets Carolyn Murphey Melchers, Sara Hauser, Anna Fedorova, Yannick Lengkeek and Tibor Schneider and rock musician Juergen Sturm with Mary Jane.

Keith Armstrong was also in Tuebingen from Tuesday 11th November 2014 to Saturday 15th when he performed his poetry in the legendary Heckenhauer’s Bookshop, one of his favourite bars The Boulanger, at the Carlo-Schmid-Gymnasium (school) and at Weinhaus Beck for a poetry breakfast. He was joined by Tibor Schneider, Sara Hauser, Yannick Lengkeek and Anna Fedorova with Peter Weiss on accordion and Juergen Sturm on rock guitar and vocals.

Sara Hauser visited Durham from Monday 12th to Thursday 15th May 2014 for sessions at the University's English and German Departments  and meetings with local writers, artists and musicians.
So the twinning continues to go from strength to strength. Looking back on things, Armstrong and folk rock musician Gary Miller, lead singer of Durham band the Whisky Priests, travelled to Tuebingen at the end of March 2012 for performances in pubs, cabaret venues and schools where they performed with Tuebingen poet Tibor Schneider who visited Durham in October of that year as part of the ongoing exchange.
Tibor joined his Durham counterparts for readings at Durham University and at the Half Moon Inn. He was also interviewed on BBC Radio Tees concerning his Durham visit.

This trip reciprocated a visit to Durham in November 2010 by Tuebingen poets Henning Ziebritzki and Carolyn Murphey Melchers, when Juergen Stuerm also took part in a series of pub performances. There was a special event at Clayport Library, Durham City on Monday November 1st with the Tuebingen poets and special guests from Durham, followed by a rousing session in the Dun Cow when Juergen, with Mary Jane, and his Durham counterparts, Gary Miller and Marie Little belted out their lively songs.
Armstrong was also in Tuebingen in May 2010 with Gary Miller for performances in his favourite Tuebingen bar ‘The Boulanger’ and at a local school. This followed a special guest appearance in 2009 at the biannual Book Festival, a reading with Tuebingen counterpart Eva Christina Zeller and a visit to local schools. Eva visited Durham for readings in schools and at a special event on May 13th 2009 at Clayport Library which also featured poets Katrina Porteous, Jackie Litherland, Cynthia Fuller, and William Martin, as well as Doctor Armstrong and music from the Durham Scratch Choir and Andy Jackson.

Posted by keith armstrong at 9:08 pm 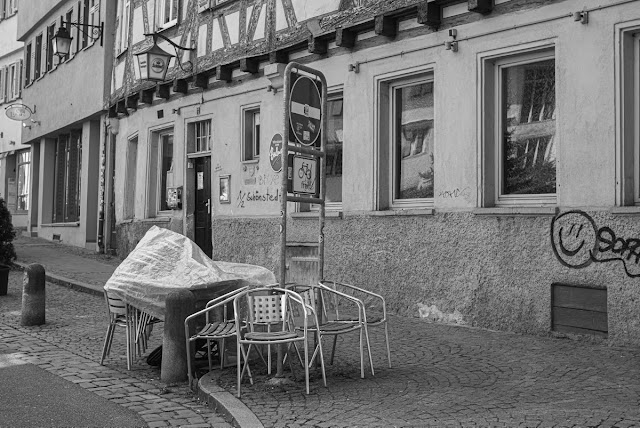 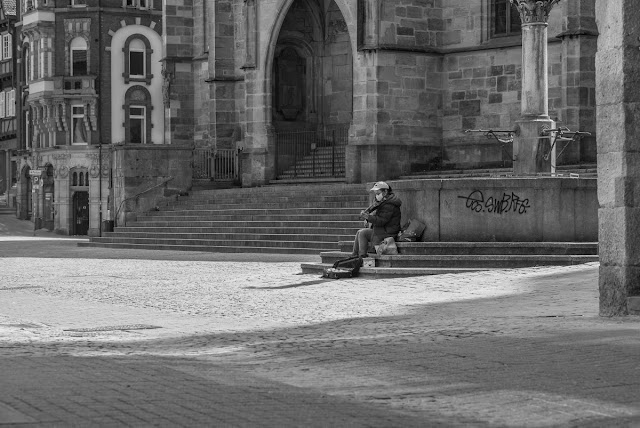 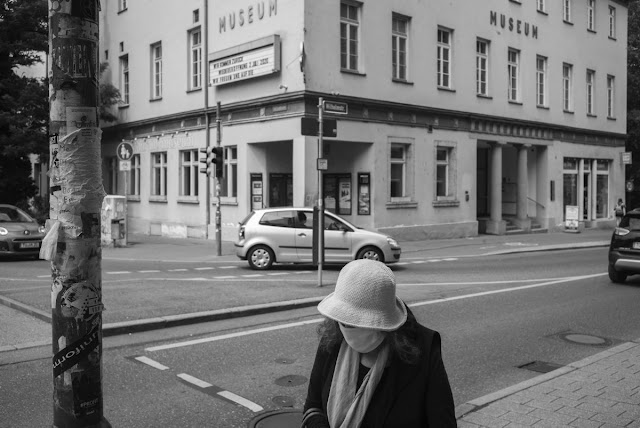 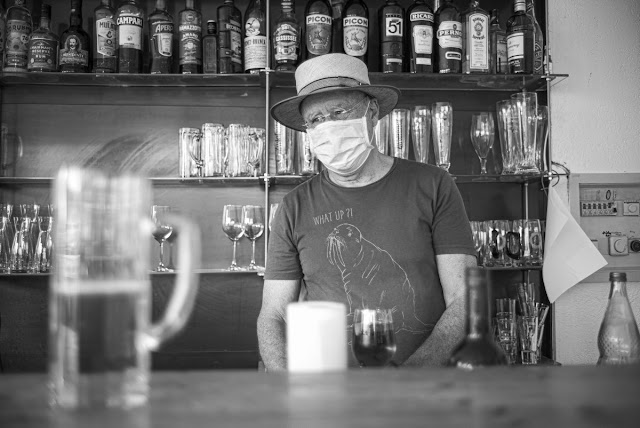 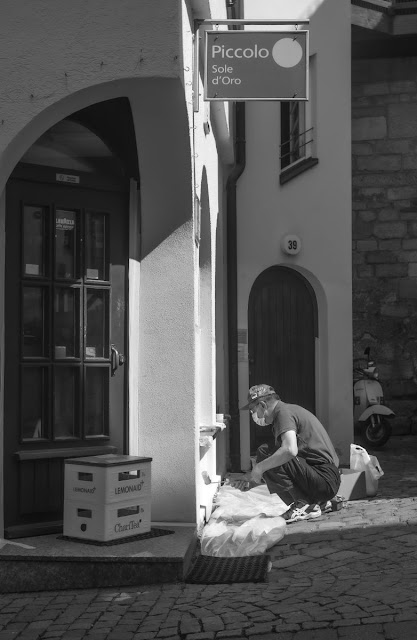 CORONA POEMS - INSPIRED BY THE PHOTOGRAPHS OF ULRICH METZ TAKEN DURING THE LOCKDOWN, AND ITS AFTERMATH, IN TUEBINGEN, TWIN CITY OF DURHAM.

A DISPLAY OF ULRICH'S PHOTOGRAPHS ALONGSIDE THOSE OF 8 OTHER PHOTOGRAPHERS COMMENCED ON SATURDAY OCTOBER 3RD AT 11AM IN TUEBINGEN'S HOLZMARKT WITH A GUIDED TOUR OF 23 STORE WINDOWS IN THE CITY WHERE THE PHOTOS, AND MY POETRY TEXTS, ARE FEATURED FOR A PERIOD OF 6 WEEKS.

'Tuebingen ... .is like a fallen glove; it lies there in an empty and hushed hangover ....' (Eduard Moerike}


'If there is anything that one can always long for and sometimes find, it is the loving attachment to another human being. (Albert Camus)


The sky above the Rathaus

filled with a sparkling rain.

and you can hear

wafting over the Neckar.


All well and good

when all they ever yearned for

was to hug their families

and to bury their old people

with some kind
of dignity.

Choirs around the world

especially in a crisis,

so that I can enjoy

feeling the breath from the river

and briefly kissing away

the curse of dreams

in the vibrant night,

the tables are covered

in a virus shroud.

the surface of the wood,

we cannot even smile.

to the old and young,

I will not forget

the poems you made:

they will live on

in this closed-down town;

This is marriage of loneliness,

united in a strong affection,

a love of life

the fear of touching.

of the Cafe Piccolo,

I will not wear

I will not be scared

to open up my heart.

I will take a beer

the sunshine of it,

there are lovers unable to touch one another,

children cut off from the old,

vicars who cannot pray in their own churches.

there are working girls who cannot find work,

footballers with no games to play in,

libraries with no books to borrow from.

there are hotels with no rooms to stay in,

buses and trains without any passengers,

there will be sunshine again,

wine and song to fill the days and nights

and futures to dance in.

Posted by keith armstrong at 2:49 pm 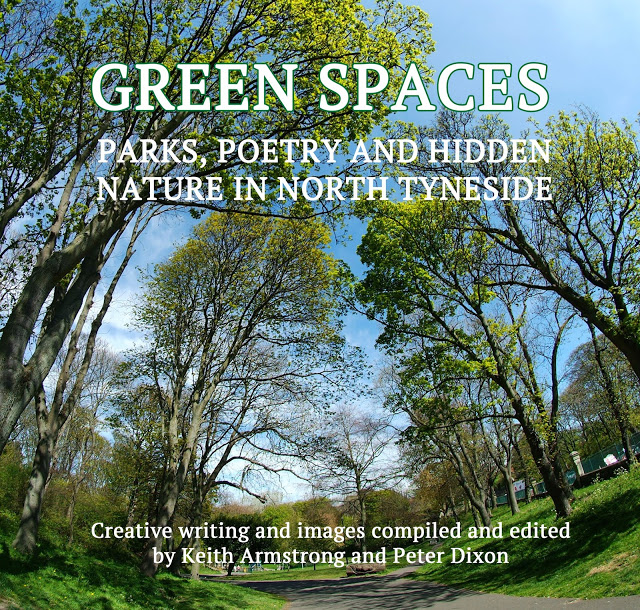 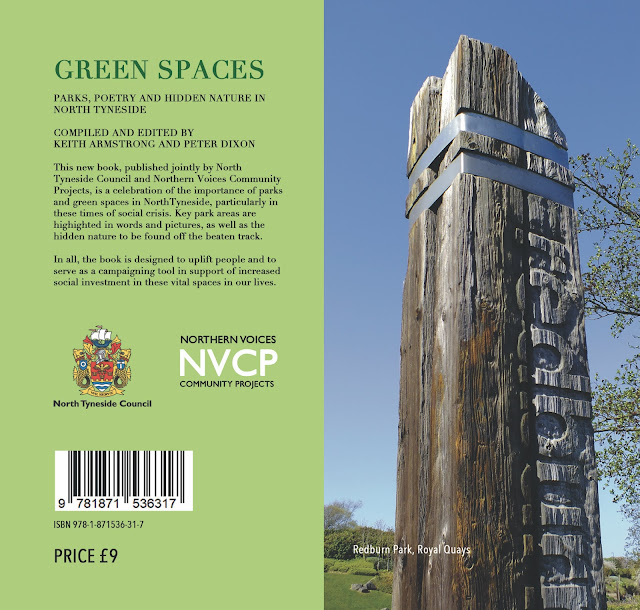 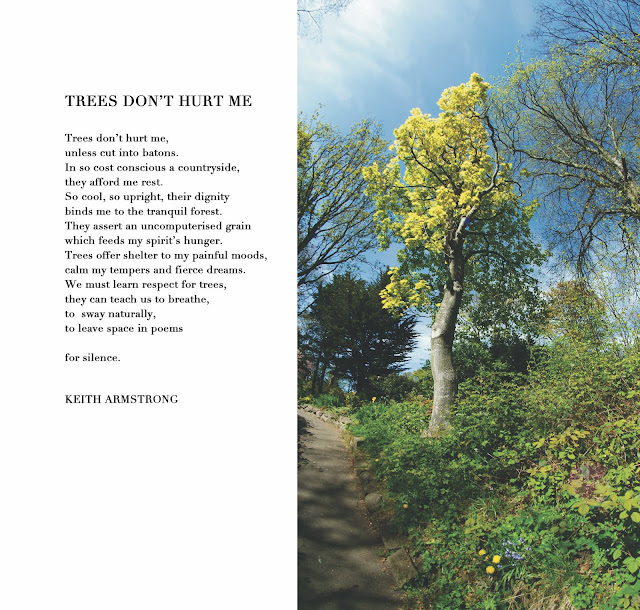