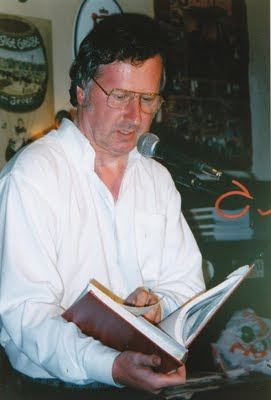 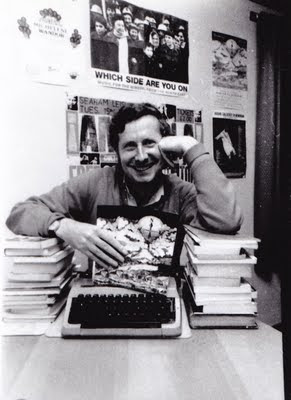 Just to let you know, I presented a copy of Spanish City to Fiona Bruce when she recently came to Delaval Hall with the Antiques Road Show and she was delighted to receive it. I take every opportunity to advertise our wonderful Borough and the talent we have within it. 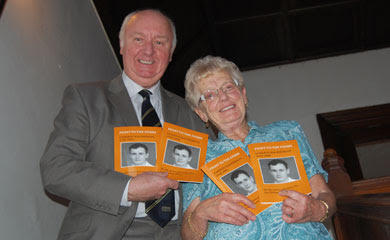 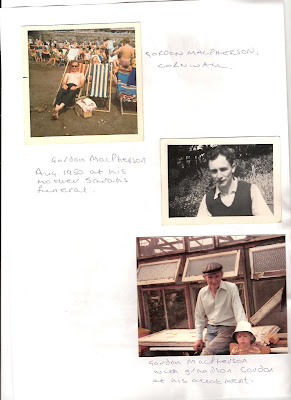 The life, poems and stories of an East Durham Miner
This is a moving and passionate account of one man’s extraordinary battle against adversity to raise a family in an East Durham pit village.
Gordon MacPherson's poetry and writing sums up the arduous working conditions that miners struggle under and his own personal battle with emphysema in later life.
Gordon was an ordinary miner who did great things. This book glows with love and human decency against all the odds.
It shows us the power of community and serves as an example for the future of this area of North East England and beyond.
Published by Northern Voices Community Projects, 93 Woodburn Square, Whitley Lodge, Whitley Bay, Tyne & Wear NE26 3JD.

Posted by keith armstrong at 12:07 pm
Have bought 'Splinters' and it's more than lived up to my expectations. Good work, Keith. I love it! Zenida Mcdonald

a collection of fifty-three poems

There are those who tell the terrible truth in all its loveliness. Keith Armstrong is one of them, a fine poet who refuses to turn his back on the wretched of the Earth. Adrian Mitchell

Keith is a noted Geordie wordsmith, a bloke whose musings were always radical, though of their place. Folk Roots Magazine

Splinters is a collection of fifty-three poems.

Born in Newcastle upon Tyne, where he has worked as a community development worker, poet, librarian and publisher, Keith Armstrong now resides in the seaside town of Whitley Bay. He is coordinator of the Northern Voices creative writing and community publishing project and has organised several community arts festivals in the region and many literary events. He was also founder of Ostrich poetry magazine, Poetry North East, Tyneside Poets and the Strong Words and Durham Voices community publishing series.

He recently compiled and edited books on the Durham Miners’ Gala and on the former mining communities of County Durham, the market town of Hexham and the heritage of North Tyneside. He has been a self-employed writer since 1986 and he was awarded a doctorate in 2007 for his work on Newcastle writer Jack Common at the University of Durham where he received a BA Honours Degree in Sociology in 1995 and Masters Degree in 1998 for his studies on regional culture in the North East of England. His academic study of Jack Common was published by the University of Sunderland Press in 2009.

His poetry has been extensively published in magazines such as New Statesman, Poetry Review, Dream Catcher, and Other Poetry, as well as in the collections The Jingling Geordie, Dreaming North, Pains of Class and Imagined Corners, on cassette, LP & CD, and on radio & TV. He has performed his poetry on several occasions at the Edinburgh Fringe Festival and at Festivals in Aberdeen, Bradford, Cardiff, Cheltenham (twice at the Festival of Literature – with Liz Lochhead and with ‘Sounds North’), Durham, Newcastle upon Tyne, Greenwich, Lancaster, and throughout the land.

In his youth, he travelled to Paris to seek out the grave of poet Charles Baudelaire and he has been making cultural pilgrimages abroad ever since. He has toured to Russia, Georgia, Bulgaria, Poland, Iceland (including readings during the Cod War), Denmark, France, Germany (including readings at the Universities of Hamburg, Kiel, Oldenburg, Trier and Tuebingen), Hungary, Italy, Ireland, Spain, Sweden, Czech Republic, The Netherlands, Cuba, Jamaica and Kenya. 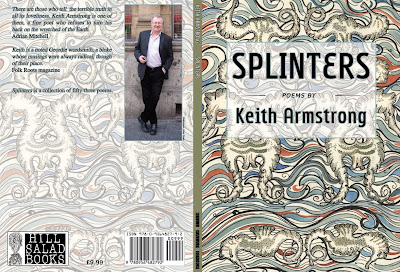 Posted by keith armstrong at 7:20 am


Although better known in later life as an acclaimed translator of Russian literature into English, Alan Myers spent much of his career as a teacher.

He spent the years between 1963 and 1986 teaching Russian, English and social studies at Letchworth Grammar School in Hertfordshire, which later changed its named to Fearnhill when it became a comprehensive in the mid-1970s.

He was also in charge of the school library and acquired such a vast general knowledge that colleagues would often find books or newspaper cuttings put in their pigeon holes on subjects that had cropped up in the staffroom just the day before. The cuttings he supplied would usually be rustled up from the enormous collection he would keep in shoeboxes that he had crammed into his Hitchin home.

Such an eclectic mind was often put to good financial use, with trips around the town to regularly empty the pubs' fruit machines of their coffers. For Mr Myers, who was affectionately known simply as Myers or Big Al, teaching was a vocation.

A distrust of authority meant he was difficult to manage, but his maverick character inspired successive generations of pupils. For him, school was about teaching what he thought was important and what his pupils needed to know. His obvious intelligence was not scornful of those who knew less; rather, his passion was for sharing that gift.

His teaching to sixth-formers became legendary as rapt boys listened to him talk about subjects ranging from Plato to Marx - all in the same hour, without notes or visual aids.

He was a man who loved books and hacked out newspaper cuttings, but hated modern technology, fearing it would remove the personal touch between humans and literature. But he later put it to good use, setting up his own Wikipedia page and an A-Z list of literary people connected with his native North East. Colleagues would play a game of trying to catch him out with which figures he had missed off.

Born in South Shields, he was a fierce defender of the region and staff at The Guardian newspaper would often receive anonymous postcards pointing out the inaccuracies or omissions about the North East in the published copy. It was only when he wrote to the editor that his cover was broken.

That these were anonymous was typical - such mystery was partly put down to the shyness so often synonymous with larger-than-life characters but was also attributed to his time spent in Moscow as part of his Russian studies at London University. These took him as an exchange student to the Soviet capital, where he met his future wife Diana, who returned to England with him in 1961.

He was often in touch with Russian emigres in London and was fond of telling the story that he was interviewed by both the CIA and KGB in the same week. Perhaps his anxieties about the spooks - he would never answer his home phone, always preferring callers leave messages after the beep - fuelled his desire to be secretive. He once told colleagues he had spent a week sharing a cabin on the Baltic Sea with a murderer - and left it at that.

This air of mystery extended into his later life where his mastery of the Russian language saw him become an acclaimed translator of Russian literature into English. His translations included work by Pushkin and in 1992 his reputation was cemented internationally with an edition of Dostoevsky's The Idiot.

Perhaps his most eye-catching commission was to translate a Russian film version of a Dickens novel into English for an American audience. He later said he was paid for the work in used roubles in a gents' toilet at King's Cross.

His last translations were published by Penguin in 1999 but his version of The Idiot won him a new - and very large - audience as the preferred text for schools and universities in China.

But it was his teaching ability that inspired hundreds, as he regarded education as an act of charity, opening pupils' eyes to where their abilities, large or small, might take them.

In praise of … impoverished poets
When mammon and the muse mix, the result – as the dispute at the Poetry Society shows – is fit for the pen of Pope or Swift

Where is Alexander Pope when you need him? The row which has led to the Arts Council suspending payments to the Poetry Society would be the perfect subject for one of his mock-heroic epics. Or Jonathan Swift, perhaps, who could attempt to untangle the battle between the Big Enders and the Little Enders. Certainly, there is the whiff of 18th-century literary score-settling in the conflict. If only the issue was one of rhyme versus blank verse or a ban on onomatopoeia – something that matters to poetry. In reality, the clash is one of personalities – the society's director fell out with the editor of its magazine – and the immediate cause was money. The irony is that the Arts Council created the crisis in the first place by increasing its grant to the society. Poets, who have never had money, were overwhelmed by the largesse. The society's director wanted to spend it on education; the magazine editor preferred to support established poets. Things fell apart, the centre could not hold, anarchy was loosed upon this little world, and the poet-bureaucrats have now slouched home to Bethnal Green. TS Eliot may originally have been a banker, but as a general rule mammon and the muse do not mix. Poets are impoverished outsiders; poetry derives from longing, not fulfilment. The Arts Council hopes the formation of a new board at the Poetry Society will mark a fresh start for the "poetry sector". This clunky language does not bode well. No self-respecting poet would be seen dead in the poetry sector.
Posted by keith armstrong at 8:10 pm 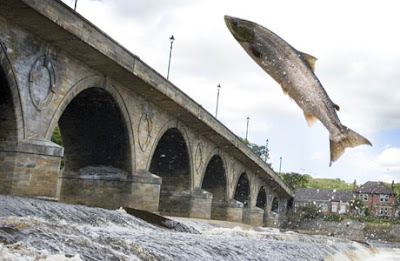 Back to the days of a touch of class - Cookson Country - Shields Gazette
Posted by keith armstrong at 2:10 pm 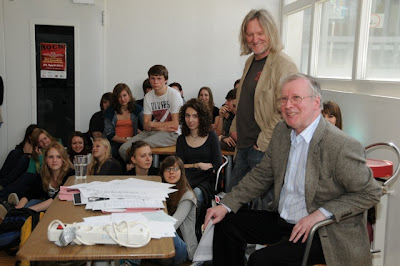 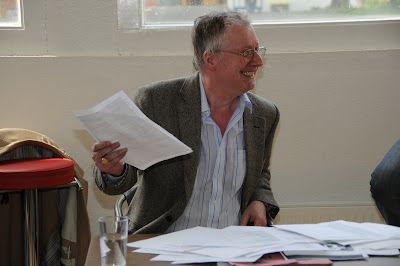 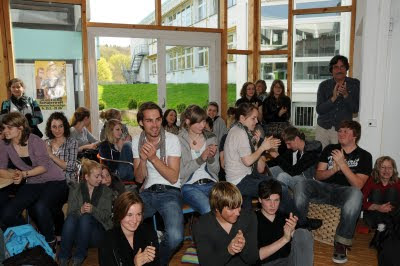 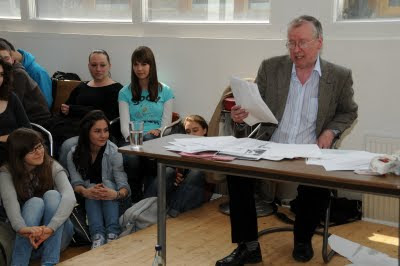 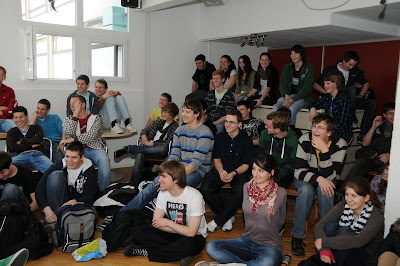 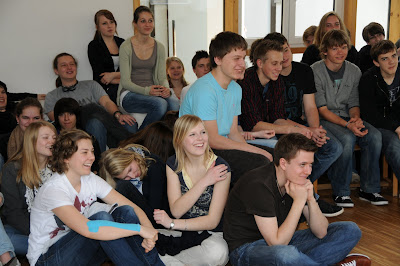 A highly amused audience of young people. Can you imagine better?? Congratulation!
Margit 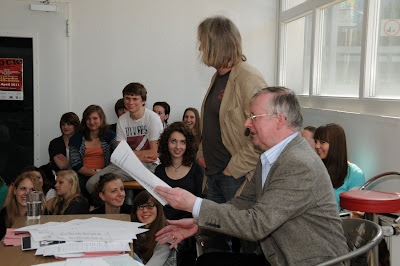 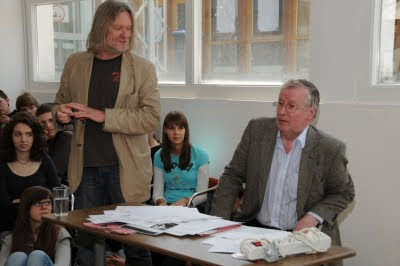 Keith. So pleased your poetry is for ever appreciated by so many people.
Love,
Zenida.xxx
Posted by keith armstrong at 1:36 pm

listenupnorth.com - Durham
Posted by keith armstrong at 11:16 am 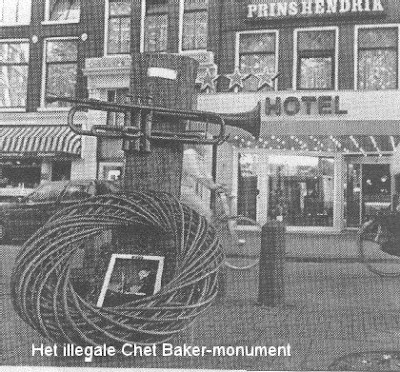 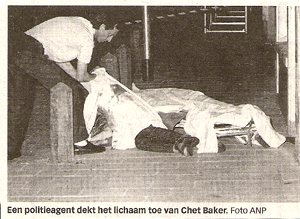 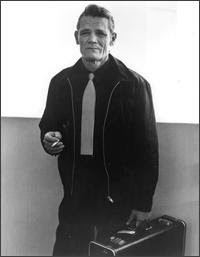 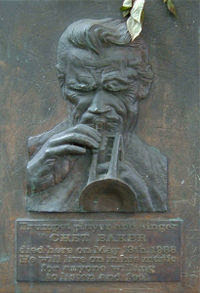 CHET - FROM A WINDOW
(in memory of Chet Baker 1929 -1988)
The constant onslaught of Amsterdam
surged through Zeedijk
on that hot night
when a full moon
dragged you
flying to your death.
In your room,
in the Prins Hendrik Hotel,
your clothes lay
neatly folded
in your suitcase,
with your body
a foetus on the street below.
Great white hope
fallen
offstage,
a love for heroin never shaken.
Sorrow was your stuff,
a plaintive,
lyrical anguish,
an excess of gloom
and charm.
This undernourished and parched body,
a singing corpse,
searching for an uncollapsed vein,
an expert driver hating the road
and the bleak hotel of his doom.
Such a foolish love.
Oklahoma farmboy on a golden trumpet,
his teeth knocked out in San Francisco,
become chained to an album a day
for a thousand dollars in cash.
And the Italian you learned in a Lucca jail,
your spirit surviving its deportation,
a lonely and melancholy master drifter
whose pianissimo
touched the soul.
Friday 13th May 1988,
Chet’s heart stopped
and his horn
lost its tongue.
KEITH ARMSTRONG
Posted by keith armstrong at 4:33 pm
Newer Posts Older Posts Home
Subscribe to: Posts (Atom)