He qualified as a Chartered Librarian at Newcastle Polytechnic and was employed in this field at Newcastle University Library, Blyth Public Library, International Research and Development Company (I.R.D.,Newcastle), Merz & McLellan Consulting Engineers (Killingworth), Gateshead College and Sunderland Libraries, before becoming a community worker with Newcastle Neighbourhood Projects (part of Community Projects Foundation), research worker withTyneside Housing Aid Centre, and then Community Arts Development Worker (1980-6) with Peterlee Community Arts (later East Durham Community Arts).
As an industrial librarian at I.R.D., he was christened 'Arts & Darts', organising an events programme in the firm incuding poetry readings, theatrical productions, and art exhibitions by his fellow workers, as well as launching Ostrich poetry magazine using the firm's copying facilities and arranging darts matches between departments!
He has been a self-employed writer since 1986 and he was awarded a doctorate in 2007 for his work of Newcastle writer Jack Common at the University of Durham where he received a BA Honours Degree in Sociology in 1995 and Masters Degree in 1998 for his studies on regional culture in the North East of England.
His book on Jack Common 'Common Words and the Wandering Star' was published by the University of Sunderland Press in 2009.
Posted by keith armstrong at 8:08 pm 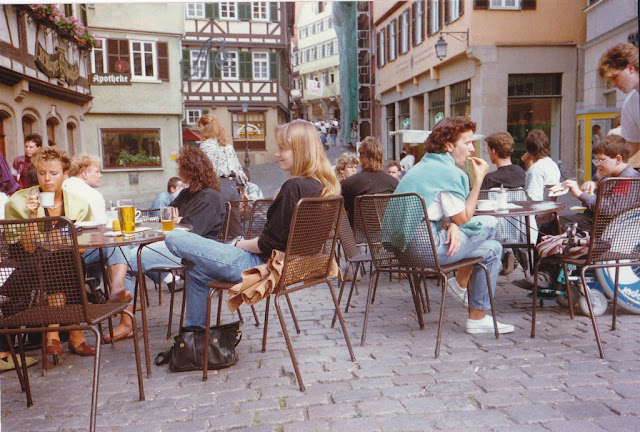 Oh Jenny
you walked with me in your dreamy way
along Hauffstrasse,
my lady out of a fairy tale,
blonde hair shimmered
golden
in the Neckar breeze.
And what exactly were we doing
together
sharing those crazy moments?
Wild flower
plucked from Friedrich’s grave,
you wanted something more tangible
I fear
in your oh so sensual way.
You intoxicated me
with the strange fragrance
of your long sexy fingers,
the depth of your lips.
But you couldn’t understand
why I called you ‘Caroline von Schlegel’,
why I wanted to make love to you
in smutty Amsterdam
on a creaking canal boat
on soaking Prinsengracht,
when I could
have had you
simply,
basically,
all to myself
on your bed
at home.

Alfonsas Nyka-Niliunas was born in 1919 in the highland region of Lithuania. He studied Romance languages and literatures and philosophy at the University of Kaunas and the University of Vilnius. In 1944, as the Soviets encroached upon Lithuania, he escaped to Germany, where he lived in Displaced Persons camps until 1949, furthering his studies at Tübingen and Freiburg universities. In 1950, Nyka-Niliunas emigrated to the United States, He is considered to be one of the main émigré poets. He has published a number of books of poetry, has translated Dante, Virgil, Shakespeare, T.S. Eliot, Baudelaire and other important European poets into Lithuanian, and has been awarded many prizes, amongst them the Lithuanian National Prize for Literature.
Posted by keith armstrong at 5:29 am

I believe, to progress human beings have to think critically. Neo-liberal governments have removed critical thought from education in the last twenty years. It is not considered necessary for a consumer society. Now we're in a mess. We can only move forward once we reintroduce critical thought in education. Critical thought can make people discontented and unhappy but it also gives them a tool with which to change the world.

Dr Keith Armstrong will give a talk and reading on Newcastle writer Jack Common (1903-68) at this year's George Orwell Festival, David's Bookshop, Eastcheap, Letchworth. 7.30pm, Saturday 22nd September. Admission free. Armstrong's doctorate at the University of Durham was based on the life and work of Common. Common was a friend of Orwell and at one time looked after his cottage in nearby Wallington when Orwell was away on travels.
Posted by keith armstrong at 8:42 am

The objectives of Northern Voices Community Projects are to:
1) Offer a platform for the views and experiences of those people living in the North East of England who are normally denied a voice. Through this, question and subvert established views of culture and the distortions which often surround them and give support to local autonomy and integrity as opposed to centralism and the anti-democractic hierarchies of government and big business, the aristocracy, mass media and ever increasing quangos.
2) Contribute to the culture of the region through a projects and events programme which celebrates its diverse communities, in particular the currently neglected working class, and the area's history and politics and dissenting tradition. Recent projects have involved a touring show in Northumbrian churches, performing poetry on the beaches, working in the community of Spittal, profiling Whitley Bay's Spanish City and the Marsden Rock in South Shields, celebrating the Newcastle writer Jack Common and the Durham links of poet Christopher Smart, performing and recording with folk, pop, classical and jazz musicans and exhibiting with visual artists and photographers. Important events have recently been staged with Amnesty International, the Tyneside Irish Cultural Society and the North East Labour History Society.
Northern Voices Community Projects attempts to be original and innovative in its programme and to seriously engage with local people and issues rather than indulge in the predictable and unchallenging nature of many cultural events and projects which are often more to do with careerism and the overbearing machinations of cultural bodies which see the arts as a vehicle for commerce and business.
3) Develop links with likeminded people and institutions, locally, nationally and internationally by a commitment to collective action and to engaging in political activity in an historical context. Recently, reciprocal links have been established with Limerick and Cork, Bradford, Liverpool, Lincoln, Sheffield, Penrith, Aberdeen and Edinburgh and there are significant international links with, for example, Groningen in The Netherlands and Tuebingen in Germany, stretching back some twenty years. Further similar links are actively sought in order to avoid literary and publishing activity being presented in overtly institutionalised, centralised and isolated cultural ghettos which merely replicate prevailing establishment and ruling class orthodoxies.
Such links also question overly cosy notions of  'The North' and celebrate North East England's place in the world and particularly in Europe.
4) Offer help and advice to local people seeking to develop a voice. This can be through creative writing, songs, community research or on tape and through the media and new technology.

Membership is open to anyone who shares the objectives of Northern Voices Community Projects and who wishes to engage in community arts activity in the North East of England.

Northern Voices Community Projects acknowledges project support from the Community Foundation, Awards for All and North Tyneside Council.
Posted by keith armstrong at 5:55 am


The Grace Darling League
must be one of those 20,000 Leagues Under The Sea.
In your Museum,
the Flotsam & Jetsam
drifts on a becalmed Bamburgh day.
A sharp sunlight cuts through the church window:
‘Out of the Deep have I called unto Thee’;
‘Charity, Faith & Hope’.
These tangled words that make up our lives,
the tattered wrecks, flaked skins.
I stare in awe at a piece of the Oar you used,
constructing a jigsaw of your life:
here is a scrap of your dress,
a throb of your ‘English Heart’;
here, locked up, a lock of your hair,
a handbag containing your thoughts;
and ‘There’s The Girl That I Love Dearly’,
a storm in a teacup,
a National Heroine of Japan
who coughed herself to death
like a seagull choking in oil,
like the bloodshot wreck of a dying Empire:
‘Saving Grace’,
save our souls:
Sister,
Save Our Souls.
KEITH ARMSTRONG
Posted by keith armstrong at 6:14 pm