I follow your blog. And I liked very much your article THE BREAKING WHEEL. I´m Rosa Ulpiano from Spain. And I´m art critic. Nice to meet you.

This is the place of torture.
Life is not easy.
Look at your own face,
it is lined with the worries
of those long flown away;
their lives,
for what they’re worth,
lie stretched across history,
stinking of injustice.
This is more agony
than smiles.
Sip your coffee
and think
of those who died making it.
Soak up the warmth of the sunshine
in this carcass of a town
for we are just fleeting meat
on the Catherine Wheel of centuries,
simply dust
on the sheen of the river.
That man walking
across the marketplace
looks kind
but underneath it all
he is a murderer of insects,
an officer
who’ll break you on the cross
with his sturdy provincial mallet.
It’s a race of rats
scurrying past the Stiftskirche window
in a frenzy stripped of meaning.
Do not trust a judge,
he will crush you
to save his own wig and skin.
The Law is an ass
and lawyers are donkeys
in fancy gowns,
feasting on slaughter
and leering
among the carnival crowds.
And don’t even think
of trusting a crow,
it will feed on your pathetic verse
and hockle out the crumbs of words
into the Lange Gasse gutter.
Can you even board a plane
without thinking of the dead on battlefields?
Can you sit in an airport lounge
without seeing the severed limbs
strewn around you?
Is that a swastika logo
in McDonalds?
Helmut Herzfeld eat your heart out
for they are still
going about their duties,
breaking spirits with missiles,
hammering the humanity
from loving communities.
Let me show you
the hillside
where they displayed the broken body
for the world to scoff at.
Let me remind me you
how cruel the bastards are,
how ugly that Nazi is at the bar.
You know we are fragile,
passing butterflies
in the appalling rush hour
of the dying day.
Please please cling to me,
cling on to the immense value of your own dark dreams;
instead of a simple carnage,
think of your complicated beauty.
That way it wil be easier
to walk along Wilhelmstrasse
in the flowing rain,
to love a girl called Catherine
for her caring spirit
and a refuge seeker
for his marvellous poems.

The breaking wheel, or Catherine Wheel, was a torture device used for capital punishment in the Middle Ages and early modern times for public execution by cudgelling to death.
It was a crude implement of torture reserved for commoners who had killed their families, committed murder during the course of theft, betrayed their lords, or otherwise outraged the community with excessive crimes. The condemned prisoner was lashed to a large stout wagon wheel and an executioner broke all of the prisoner’s limbs and joints with a cudgel or metal bar. The broken limbs were secured to (or threaded through) the spokes of the wheel and the prisoner was hoisted into the sky on top of a pole to contend with dehydration and the birds.
In a window on the north east side of the Stiftskirche in Tuebingen


(today the Protestant Collegiate Church and, before that, the Catholic Church of St. George) is the carved stone image of a man on a breaking wheel.


Legend says that two journeymen went on tour in the woods near Tuebingen, but only one came back. As he had a dagger with him that the other man had once received as a gift, he was thought to have murdered his missing companion and the Duke of Wuerttemberg had him broken on the wheel. When the other man turned up alive and healthy a week later, the Duke was directed to do penance by paying for a window to commemorate the martyrdom of St. George, which also took place on the wheel.


The window was used by the exiled German printmaker and photomontage artist John Heartfield (Helmut Herzfeld) in 1934 as a template for one of his political photo collages - "As in the Middle Ages ... so in the Third Reich" - against the Nazi regime.
Heartfield (1891-1968) is now regarded as the inventor of political photomontage.
He skillfully adapted the swastika (itself an image adopted and misused by the Nazis) to picture what was happening to the German people under the guidance’ of Adolf Hitler and his cronies. Some might say that this image of suffering is a little generous to the German people, portraying them as the victims of Nazism, but once Hitler had secured absolute power for himself and with no way of democratically – or governmentally - relieving him of his position then victims is exactly what they were.
Heartfield employed the actor Erwin Geschonneck as a model and instructed him to writhe naked in various poses around a specially made wooden cross.
On the finished glued two-part assembly, you look down on the wheel and also see a man, as in the church window, depicted as a martyr to the swastika. 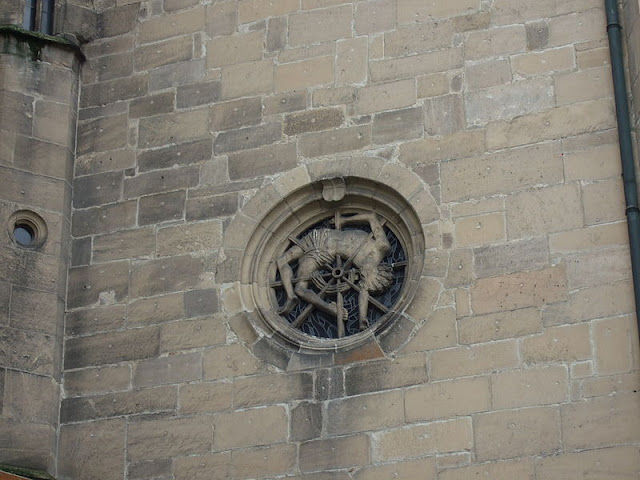 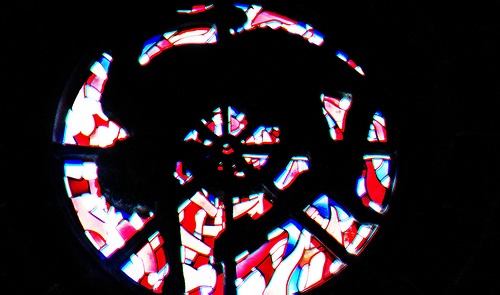 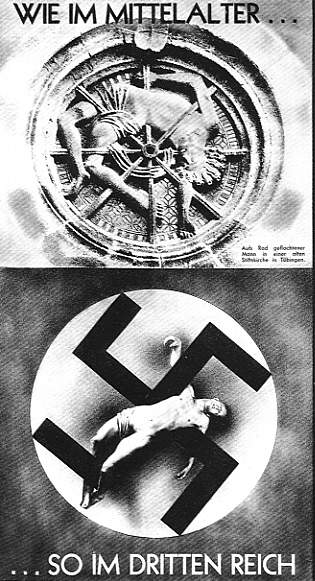 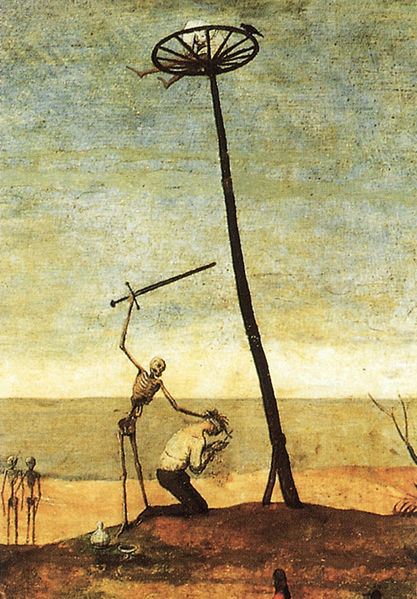 Dear Keith, your poem is a very beautiful one, we thank you very much for it. And we sent it to some of our friends! Yours Heidi and Wolfgang
Posted by keith armstrong at 8:04 am
Newer Post Older Post Home