84 - ONE FOR ALL PRODUCTIONS 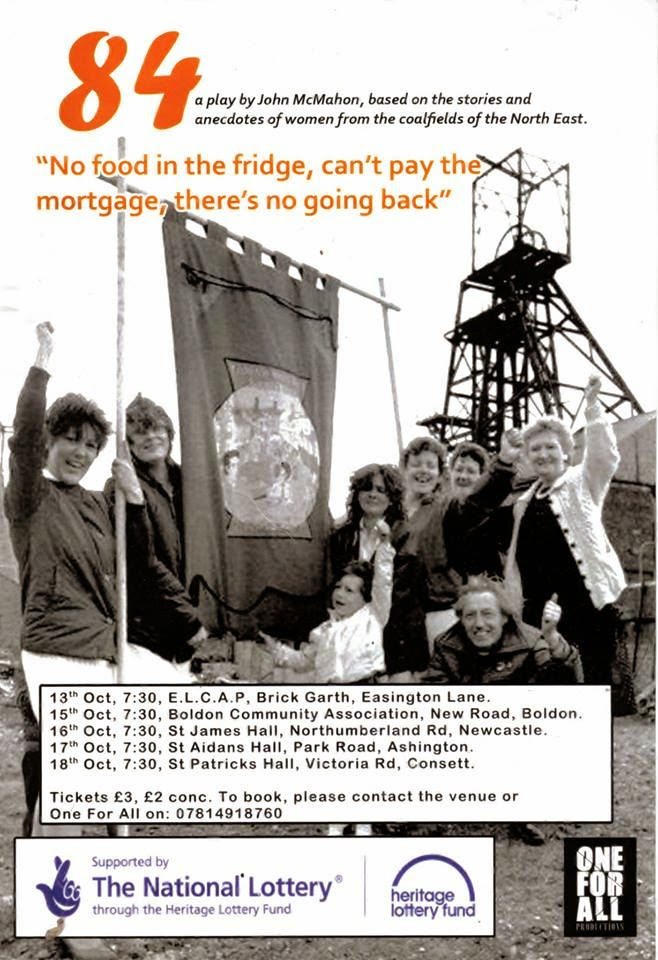 84
Review by Robert Nichols Wednesday 15 Oct 2014
It is 30 years now since the Miners Strike but in a church hall in Easington Colliery the struggles, the camaraderie and the bitter feuds and divisions were remembered as if it was yesterday.
Last night Community Arts Theatre Company One For All Productions told the story of that fateful strike from the perspective of the women that were the glue in the north east coalfield community. The four members of the acting cast and one singer drew on stories and anecdotes from the women that fed and sustained the society and stood side by side with men on the picket lines. What made it all the more poignant for me was that many of the women whose stories were being voiced were sitting in the audience reliving it all again.
Interspersed with snapshots of lives from 1984 were the often heart wrenching testimonials from young girls that worked down the pits before the 1842 Royal Commission sent them back to the surface. With poems from Keith Armstrong, Christine Hogg and Florence Anderson and songs by Elvis Costello and Billy Bragg this play took you back into the sitting rooms and soup kitchens of 1984.
It was inspiring to hear of how the pit villages initially banded together and it was almost wartime like community spirit. But we heard shocking evidence of the attacks from without and within. There was extreme police harassment on the main streets of Easington as the coalfields became the frontline in a political battle field against an enemy within.
One For All were not seeking to re fan the flames of the blame game but were laying out the record from both sides and exposing the impact on the lives of the real women and their families. There was compassion but also hatred and real suffering for their cause. Food was scarce. Bills went unpaid. Stress and depression stalked the streets at night. There should have been no Christmas in Easington that year and yet they all rallied round to make it a special time.
Sad to think that the end of the strike was all too soon after followed by the end for the pits and with it a way of life and community. But in amongst the sadness there was a final defiant message that the women of that community were still there and fighting back.
Some of the words expertly voiced by the women on stage were from Heather Wood seated in the front row of the audience. After 30 years she is regaining her confidence to organise and rally the community to a cause, this time for the church whose fabric is in perilous condition. In a moving final scene the cast joined together to sing the stirring strike anthem, Women of the Working Classes. At the onset of the strike they were normal housewives, mothers, sisters and daughters yet many found a strength and a voice in a very dark hour when their community was being wrenched apart.
I felt very privileged to part of this special evening when the story of the women from the striking coalfields as told again. It was more memorable still that many of those women were seated in the audience and 30 years on their tales of heroism and defiance were given a platform and accorded deserved recognition. An inspiring story.
A Postcript
Afterwards in the Miners Welfare Hall, Heather Wood told us of her fears about a kind of fracking that is being eyed up in East Durham. The coal seams closed off at the end of mining at Easington are still there extending far beneath the sea. They are now talking of extracting gas by burning the coal. Heather worries about the dangers and lack of safeguards to control an inferno that could potentially blaze for miles underground east and west. She points to lessons from history, etched into the coal here in Easington where 83 were killed by an explosion underground in a disaster in 1951. The Inquiry was actually held in the very building we were sitting in.
Easington Colliery - Ascension Church Hall. One For All Productions. 84 Tuesday 15th October 2014 - Director John McMahon