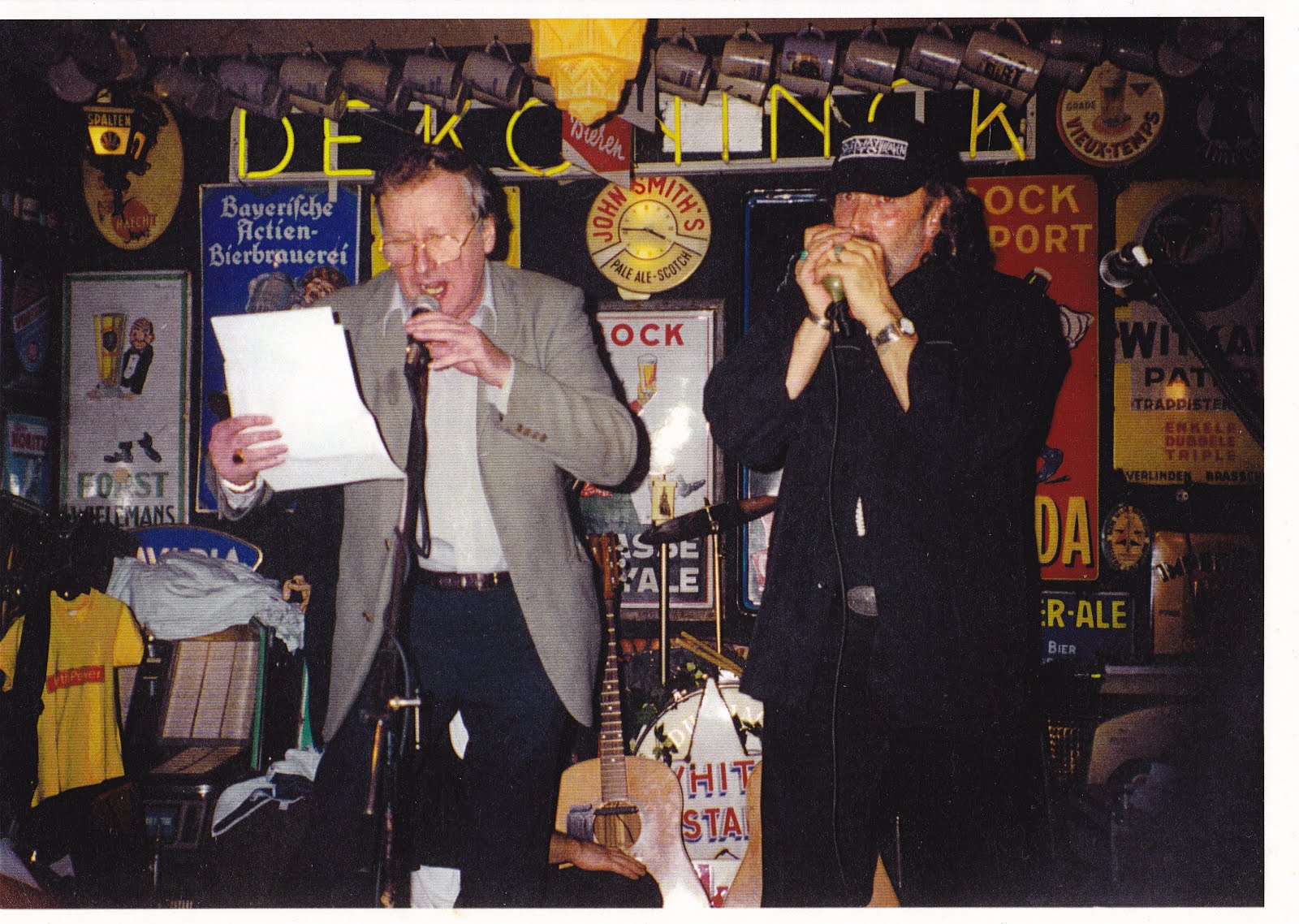 http://www.northernvoicescommunityprojects.co.uk/Northern_Voices_Community_Projects/Tuebingen_-_Groningen_-_Twinning.html
Posted by keith armstrong at 9:36 am 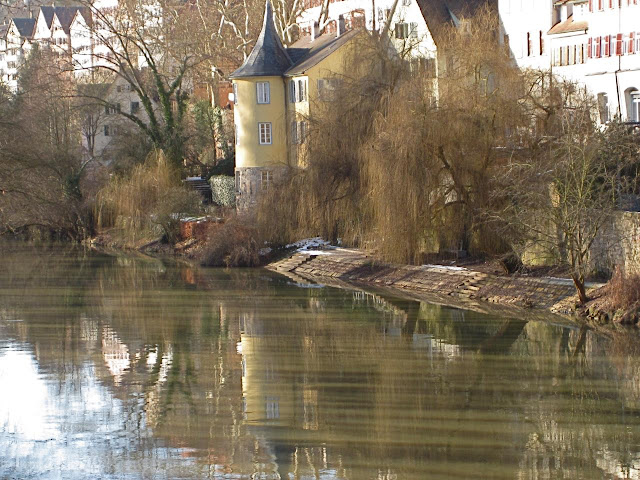 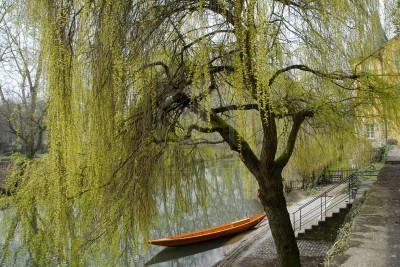 ‘The lines of life are various;
they diverge and cease like footpaths
and the mountain’s utmost ends.’

(Extract from a Holderlin poem addressed to Zimmer the carpenter, in whose Tuebingen house Holderlin lived for the last thirty six years of his life).

‘When from the depths spring enters into life,
men marvel and new words aspire out of their intelligence;
joy returns and festively poetry and songs arise.’

Suddenly, peacefully,
you’re slipping afloat,
your drifting past
in a poetry boat.

Crafted by Zimmer,
a sculptor of Woods,
your coffin is filled
with magical words.

Note: The chorus is based on pseudonyms used by Holderlin.

ROLL ON HOLDERLIN  (am Neckar)

I wish you good luck for all the seasons in your life and always a high inspiration for your poems.

(Jochen from the Holderlin Tower).’

Holderlin
rolling on,
holding on
in this fearful Germany.

I talked with my students about your reading and they enjoyed it very much. It was a very special occasion for them. They think that you absolutely have to come again next year. And I think so too.
We´ll keep in touch,
best wishes
Kristina

Posted by keith armstrong at 4:52 pm

ON THE ROAD AGAIN!

POET GOES ON THE ROAD AGAIN

Whitley Bay based poet and publisher Keith Armstrong is heading for Tuebingen, Durham's twin city in South Germany, with singer-songwriter Gary Miller, of the Whisky Priest folk rock band, on Monday 18th March
where they will perform in bars, cafes and schools with Tuebingen poets and musicians.

Keith and Gary are also currently working on a double album to be launched in the autumn telling the story of the eighteenth century 'Mad Martins' family of Tynedale.

And a selection of Keith's recent poetry, with that of fellow poet Katrina Porteous, has just been released on a new album in the Czech Republic with settings by Jakub Zahradnik, a composer and keyboard player who Keith first met on an Arts Council funded literary visit to Prague a few years ago.

Literary activist Armstrong is currently working with Newcastle's Mining Institute on a series of projects and events and he is also involved in a jazz and poetry project with North Shields artist Peter Dixon which celebrates the great figures of jazz in a touring display and events programme.

Posted by keith armstrong at 8:08 am

JUST OUTSIDE OF TUEBINGEN


It was a summer’s day
in 1817.
I was lying in a field
with Schubert in my heart.
Skylarks were flying above my soul
over the battlefields of bloody Europe;
love among the stench of war,
lust burning in the sweating grass.
That August dream,
I wanted my breath to die
in your swirling arms,
with the yellow butterflies
flitting in your dripping eyes.
I took some local wine
to soothe my startled nerves
and the lovely blood
leapt in the sun.
The future had swept me here
to sing of all the years advancing,
the awkward poems I never wrote
blowing
across the aching valley
for future birds
to peck at
in this graveyard of ambition
still
just outside of Tuebingen.

Posted by keith armstrong at 10:14 pm

The twinning continues to go from strength to strength. Poet Doctor Keith Armstrong and folk-rock musician Gary Miller, lead singer of Durham band the Whisky Priests, travelled to Tuebingen at the end of March 2012 for performances in pubs, cabaret venues and schools where they performed with Tuebingen poet Tibor Schneider who visited Durham in October of this year as part of the ongoing exchange. Tibor joined his Durham counterparts for readings at Durham University and at the Half Moon Inn. He was also interviewed on BBC Radio Tees concerning his Durham visit.

Keith Armstrong and Gary Miller will return the compliment with a trip to Tuebingen in March 2013 where they will perform again in bars, cafes and schools with Tibor Schneider and other Tuebingen poets and musicians.

In 2011, Tuebingen rock musician Juergen Sturm jetted in with his music partner Mary Jane at the end of October for pub gigs, including a twinning event in Durham on Monday 31st October featuring Juergen and Mary Jane with Durham folk musicians and poets. That followed on from a visit to Tuebingen in South Germany in early April 2011 by Keith Armstrong and photographer/artist Peter Dixon. The intrepid pair worked together on a touring display featuring Armstrong's poems and Dixon's photographs documenting the unique link between Tuebingen and Durham which was staged initially in the Durham Room at County Hall, Durham in November. Armstrong performed his poetry in cafes, bars and schools and met up with Tuebingen friends, old and new, with the multi-talented Dixon capturing all of it on film.

A highly successful series of events were held in 2007 to celebrate the 20th anniversary of the literary/arts twinning established by Keith Armstrong when he first visited Tuebingen in 1987 for a month’s residency, supported by Durham County Council and Tuebingen’s Kulturamt. Since then, there have been readings and performances in pubs, universities and castles, schools, libraries, book festivals, jazz and cabaret clubs, even in Hermann Hesse’s old apartment, involving poets, writers, teachers and musicians from the twin partnerships of Durham and Tuebingen.