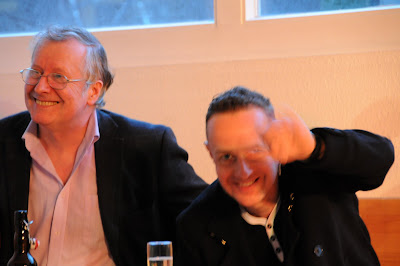 KEITH ARMSTRONG &
GARY MILLER
BLEEDING SKETCHES
Gary Miller’s ongoing collaboration with acclaimed North East of England poet Keith Armstrong stretches back to their first meeting in 1989 at the launch event for The Whisky Priests’ debut album ‘Nee Gud Luck’ in Durham in November 1989. A lasting connection and friendship was forged. Keith presented Gary with a signed copy of his latest book of poetry at the time, and Gary reciprocated by presenting Keith with a signed vinyl copy of ‘Nee Gud Luck’.
A mutual promise was made to keep in touch with tentative plans to collaborate on a future project which would involve The Whisky Priests setting a selection of Keith’s poems to music and turning them into songs.

This germ of an idea finally saw the light of day as The Whisky Priests acclaimed 1995 album ‘Bleeding Sketches’:

“The combination of The Whisky Priests’ Gary Miller and North Eastern poet Keith Armstrong is a match manufactured for mastery.” (Rob Nichols, Paint It Red, UK).

“An absolute must for anyone seeking a bit more than meaningless lyrics and musical nihilism.” (Charmaine O’Reilly, ‘The Edge’, UK).


MAD MARTINS
In 2002 Gary and Keith re-established their creative links through ‘Mad Martins’, a project initially conceived by Keith about the notorious Martin brothers of 18th Century Tynedale, Northumberland; William (the self-styled "philosophical conqueror of all nations"), Jonathan ("the notorious incendiary" of York Minster), and John (internationally renowned painter). Keith contributed a wonderful collection of poems to the project while Gary wrote an epic song cycle about the three brothers, coming up with more than a full album’s worth of material in the space of two weeks, including such gems as ‘In Dreamtime’, ‘The Dandy Horse’, ‘The Paint and The Pain’, and ‘Pandemonium’, amongst others.
‘Mad Martins’ was premiered at Northumberland Traditional Music Festival, Queens Hall Arts Centre, Hexham, in October 2002 with a 90-minute performance featuring poems and narrative read by Keith interspersed with a selection of songs performed by Gary accompanied by his twin brother Glenn on accordion and northumbrian piper Chris Ormston.

“All this material was cleverly conceived and very well appreciated by the audience. A very fine experience indeed. This was a worthy and entertaining compilation. For anyone with an interest in the Martin story, it is not to be missed. A most enjoyable event in this format with all the participants making a night to remember. Congratulations to the ‘Mad Martins’.” (Henry Swaddle, World of John Martin).

Gary’s developing illness at that time, however, prevented further development of the project and it was shelved. It is hoped, however, with the relaunch of Gary’s performing and recording career in 2010 that these songs can finally be recorded for CD and that the project can be revived.

TOURS
Earlier, in 2001 Gary Miller and Keith Armstrong had toured the Netherlands as a trio with Gary’s twin brother Glenn. Since 2004 Gary and Keith have toured Germany and the Netherlands together on a regular basis, performing as a duo presenting concerts, workshops and seminars. Further trips by Gary and Keith to both these countries continue along with other European territories such as Ireland and the UK.

HEXHAM RIOT
In 2003 Keith invited Gary to take part in an anniversary project and performance in Hexham Market Place commemorating the Hexham Riot of 1761. Gary wrote half a dozen songs for the project and performed two of them at the event on 9th March 2003. One of these songs was subsequently recorded as the title track of 'Stand Fast, Stand Steady', Gary's 2005 CD with fellow collaborator Ralf Weihrauch. The other songs, including 'It's A Lottery' (lyrics by Keith & music by Gary), 'Insurrection', 'Bloody Monday', 'Redcoat's Blues' and 'The Horrific Execution of Peter Patterson' (all lyrics & music by Gary) remain unrecorded.


THOMAS SPENCE
In 2010 Gary Miller and Keith Armstrong collaborated on a series of songs about Thomas Spence (1750-1814) the noted pioneer of people’s rights, pamphleteer, and radical thinker of Newcastle-upon-Tyne. Keith is a founder-member of The Thomas Spence Trust and successfully campaigned for a plaque on the Quayside in Newcastle, where Spence was born, unveiled on Monday June 21st 2010, Spence's 260th birthday, and celebrated through a series of events including performances by Gary of such songs (words by Keith and music by Gary) as ‘Folk Song For Thomas Spence’, ‘The Hive of Liberty’, ‘Jack “the Blaster” Bates’, as well as songs written by Spence himself such as ‘The Rights of Man For Me’.

Further collaborative projects between Gary & Keith are being planned, including a song cycle about the city of Groningen in the Netherlands.

“A candidate for the official poet of the Labour Party, Keith writes with anger, pathos and control; combine that with Gary’s vituperative delivery and depth of feeling and you are tasting a potent brew.” (Jenny Coxon, ‘Folk Buzz’, UK).

Gary Miller and Keith Armstrong continue to tour as a singer/poet duo and are still available for bookings.