SPENCE & THE RIGHTS OF MAN 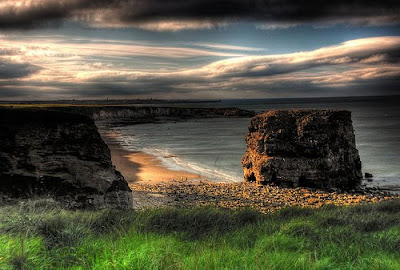 Thomas Spence claimed that he was the first writer to use the phrase ‘the Rights of Man’. When, in 1782, he visited a former miner and farmer, who had retired to live in a cave at Marsden rocks to escape from a landlord, he ‘exulted in the idea of a human being who had emancipated himself from the iron fangs of autocracy to live free from impost’ and chalked over the hearth of the cave:

‘Ye landlords vile, whose man's place mar
Come levy rents here if you can,
Your steward and lawyers I defy
And live with all the Rights of Man.’

This anecdote is given in a note to another ballad ‘The Rights of Man for Me’ composed during confinement in Newgate in 1794:

THE RIGHTS OF MAN FOR ME (Tune - Maid of the Mill)

There are many fine schemes contrived by the great
To deceive silly souls do ye see?
And render them passive for pure conscience sake
And mould them to fell tyranny.
Yet for all their fine arts with their preists in their aid,
Their threats and their deep policy,
I’ll laugh tem to scorn while loudly I sing:
The Rights of Man boys for me.

This world for the poor they say never was made,
Their portion in the heavens be,
And more, that they envy them their happy lot
So certain’s their felicity.
But thank them for nought if the heavens they could let,
Few joys there the poor would e’er see.
For rents they must toil and for taxes to boot:
The Rights of Man then for me.

Then cheer up all you who have long been oppress’d,
Aspire unto sweet liberty.
No fetters were formed for a nation to bind
Who have the brave wish to be free.
To reason attend and blush at your chains
And throw off vile slavery
And let each man sing till loud echoes ring:
The Rights of Man boys for me.

As for me though in prison I oft have been cast
Because I would dare to be free
And though in black Newgate I did pen this song
My theme I’ve not altered you see.
In jail or abroad whatever betide
My struggles for freedom shall be
Whatever fate bring I wil think, speak and sing:
The Rights of Man boys for me.

‘In the summer of 1782 a man near 80 years of age and his wife made one of the caverns under Marsden rocks, near (South) Shields, their place of residence. In the earlier part of his life, he had been a miner at Allenheads, but having removed to (South) Shields, to avoid the charge of housekeeping, he and his wife formed the resolution to retire to one of these caves, which they furnished. The romantic situation and the singularity of the thing drew numbers of people to visit them, whom they accommodated with refreshments, even ladies and gentlemen in car-riages drove to the place and partook of the old couple's cheer.’
The refreshments were alleged to have been procured by smuggling.
Local tradition knew the old miner as 'Jack the Blaster' Bates. Alex Robson of North Shields, the veteran seamen's leader who figured in the S.S. Linaria case and was active in the Red International Seamen's Union of the nineteen-thirties, claims to be a descendant.
The grotto was taken over and greatly expanded in the early nineteenth century by a Whitburn publican, Peter Allan, also seeking, like Jack, a means of running a business without paying ground rent. Allan excavated a ‘ballroom’, a dining-room and a gaol in the rocks, extra space that was much needed as, besides his his family, the grotto accomodated two pigs, a beehive, a greyhoud, a one-legged raven called Ralph and a lovelorn sailor whose hermit-like existence and unkempt appearance led him to be known as ‘Peter Allan’s hairyman’. The Allan family were eventually forced to pay rent to the farmer who owned the land above the grotto. (Source: Edward Vallance, A Radical History of Britain, Little, Brown, 2009).
Posted by keith armstrong at 9:15 am
Newer Post Older Post Home