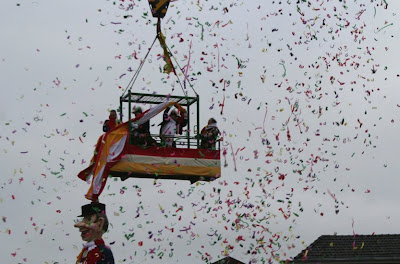 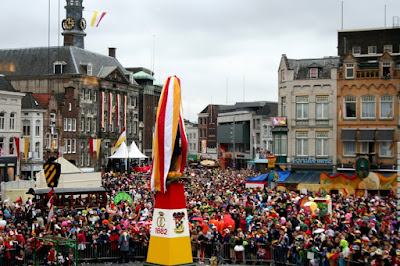 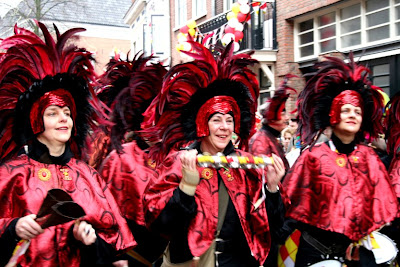 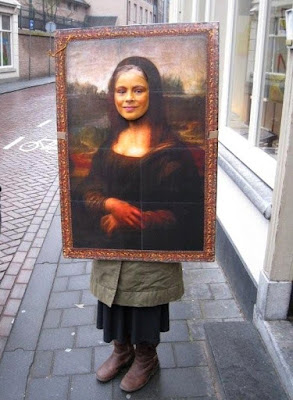 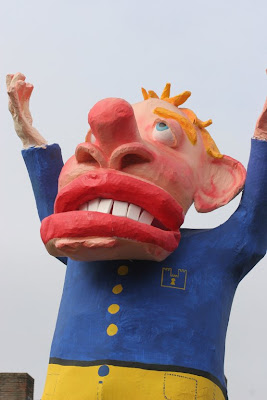 The Oeteldonk carnival is based on the old medieval tradition of the upside down world. It is a festival of crazy jesting and parody. Oeteldonk came into being in 1882 as a result of various attempts by both secular and religious authorities to suppress and forbid the characteristic carnival celebrations of the city of Den Bosch
('s-Hertogenbosch).
Carnival was celebrated in 's-Hertogenbosch as far back as the Middle Ages. Three days of partying with dancing, singing, eating and drinking before starting the forty day period of fasting. In 1629 Frederik Hendrik conquered the city with his government troops. One of the consequences of this was that public participation in the Roman Catholic religion was forbidden. This included celebration of the Catholic festival of Fasting Eve, which the reformed Protestant city government saw as "papist misbehaviour". Despite this, the festival was carried on, but in secrecy.
A new era dawned at the end of the 18th Century when with the arrival of the French, the Catholics regained their freedom. It transpired that the citizens of Den Bosch had carnival in their blood. This was given added impulse by glass blowers from Liege, who worked in the city as "guest workers" in the first half of the 19th Century. They knew street carnival celebrations from their own city and introduced it to Den Bosch. There was further stimulation, born out of necessity, from the Sociëteit Casino (Casino Society or Club). Which following the building of expensive premises on the Papenhulst, was short of funds. The society felt that it could make up its financial deficit by holding public balls, among other things. From then on other societies and clubs followed their lucrative example.
As the celebration became more widespread, behaviour became excessive. Particularly in the working class areas, where the three day festival was a welcome relief in a drab existence, there were many fights. A feature of carnival in those days was the "filthy Sunday". On the afternoon of the first day of carnival, after a church service, people went to the market from all corners of the town clad in stained clothing. There they shocked the assembled public by their performances. A well known example is that of a completely disguised person, sitting on the terrace of the Central Hotel, eating a "sausage" out of a chamber pot, and dipping it in mustard. These "filthy" people also included many "respectable" citizens in disguise. These "revels" soon met with the opposition of the bourgeoisie. Repeated requests to ban the festival from the city, were turned down because of the commercial and social interests involved.
When the church started to interfere in 1881, in the person of the Bishop Monsignor A. Godschalk, this led to a number of the wealthier citizens to take measures to protect this peoples" festival. They gathered in the café Plaats Roijaal, then located in the street Behind the Town Hall, to forge a plan which would keep everyone happy. The aim was to preserve the festival by raising the level of the entertainment. They came up with the idea of Oeteldonk. 's-Hertogenbosch, a very worldly city at the time, would be renamed and become the village of Oeteldonk for the three days of carnival. Every inhabitant of the city would be either a farmer or a wench. Naturally, there was a joke "mayor" with one or more councillors or assessors and a joke "council". In this peaceful festival village a solitary rural constable was all that was needed, and as the programme indicated he was there more to keep the womenfolk away from the city fathers, than to keep the peace. All of this was of course, in the style of carnival, a parody on the established society. A parody of the council meetings of the time, in which council politics were satirised and heavily criticised, fitted perfectly in this.
On February 20th 1882, the newly appointed mayor Peer van den Mugheuvel, entered his "rural village Oeteldonk" for the first time. On October 1st of that same year, the Oeteldonksche Club was set up to further develop and guide the initiative that had been taken. The following year another new element was added, namely the visit of H.R.H. Prince Amadeiro Ricosto di Carnavallo, Knight of the Ksam, Lord and Master of Oeteldonk and even the surrounding water-free marshes and sandy deserts etc. etc. A large procession with floats accompanied him on his entry. In this way, the Oeteldonksche Club set the example of how the eve of fasting could be celebrated in a dignified way. Slowly but surely the club succeeded in its aims: the excesses disappeared.
The Oeteldonksche Club has fostered and nourished the Oeteldonk Carnival for more than a century now. New elements are continually added and changed. Despite regular setbacks such as prohibitory orders and war situations, the OCv1882 has managed time and time again, always with the support of the Oeteldonkers themselves, to breathe new life into the festival while maintaining the old values and traditions. The set-up of the festival, as it was started in 1882, has never been negatively affected, and remains today. The rustic, folksy character is essential to the Oeteldonk carnival, where its royal ruler, Prince Amadeiro is sated in an exuberant way when he comes to honour his "pleasure garden" the Kingdom of Oeteldonk with his presence for three days. This spectacle takes place in Oeteldonk, unlike the "Rhineland" type of carnival celebrations which take place everywhere else with great pomp and circumstance.
Posted by keith armstrong at 3:21 pm
Newer Post Older Post Home