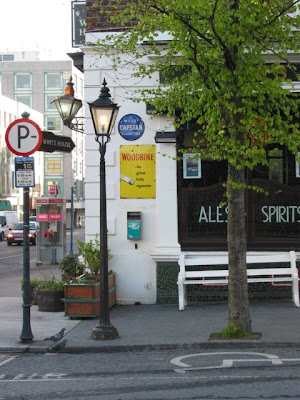 A unique project between Limerick’s White House Poets and Northern Voices from Newcastle upon Tyne in North East England came to fruition in April 2008 at the White House Pub in Limerick.

A special edition of ‘Revival’, the journal of the White House Poets, called ‘Two Rivers Meet – Poetry from the Shannon and the Tyne’ was launched featuring poets from the two cities. A delegation of poets from Newcastle attended a civic reception at Limerick City Hall, hosted by the Mayor Councillor Ger Fahy in the afternoon, while the book was officially launched later on that evening at the famous White House in O'Connell Street.

'This cultural twinning of our two cities', as founder of the White House Poets Barney Sheehan puts it, 'is a result of a number of visits that Geordie poet Keith Armstrong has made to Limerick over the past couple of years, culminating in him been an invited guest at last year's Cuisle Poetry Festival when he proposed that our two cities should work together to promote a greater degree of cooperation in the area of cultural exchange.'

As Sheehan explains: ‘Limerick and Newcastle are two cities with many things in common, not least the fact that two great rivers flow through them: the Shannon and the Tyne.  Both are university cities, both are great sporting cities and both have had similar difficulties in promoting the artistic, social and intellectual life of their communities in the face of negative press.The fact that our two cities should be brought together to celebrate their individual identities through poetry and that reciprocal visits should take place between our respective poetry groups is highly commendable and worthy of support'.

The White House Poets visited Newcastle in June when a group of nine poets read at a special reading to mark the English launch.  They met the Lord Mayor of Newcastle Councillor Dave Wood with the poets acting as roving cultural ambassadors for Limerick.

And Newcastle poet Armstrong visited Limerick for the fifth time at the end of October to keep links going and discuss plans for future activities between the respective cities.

The book is published through Revival Press, in association with Northern Voices, at (£5 plus £1.50 postage) and is edited by Keith Armstrong and Dominic Taylor.