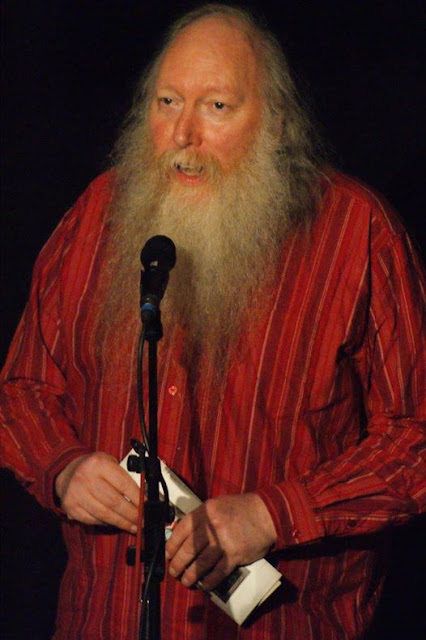 Paddy Bort dead?! That seems impossible. Paddy, for so many of us, made life possible.

A hole the size of Arthur’s Seat is in the Edinburgh folk scene today. It is with the deepest, utmost sadness that I impart the news of the sudden death of our old friend, colleague and comrade, Eberhard ‘Paddy’ Bort, long-time stalwart of Edinburgh Folk Club, the Wee Folk Club and the Phoenix Irish Pub, Lauffen.

I’ve known Paddy since I was 18 years old; Paddy and I came to Edinburgh within a year of each other in the mid-1990s. As such he was very much part of my own personal landscape musically and socially and today I am in total shock at the loss of someone who had such an influence in my early days as a young musician, starting up the ladder and beginning to travel across Europe.

Paddy was in a sense the archetypal ‘welcome stranger’ who came to Scotland from his native Germany to shine a bright light on our cultural riches that we have often been backwards in coming forwards about. A confirmed Hibernophile and Scotophile, hundreds of us in the folk scene have had floor spots and gigs at all stages of our careers from Paddy, benefitting from his drive and enthusiasm.

He gave Malinky their first floor spots, including one which got us our record deal with Greentrax Recordings Ltd, and booked our first ever big city gig. He spent hours with me discussing the topic of my undergraduate dissertation on the the phenomenon of Scottish and Irish traditional music’s popularity in German-speaking areas; he himself was very much bitten by the bug, and took Malinky and countless others to play on his home turf, the Phoenix in Lauffen am Neckar.

Flitting between his office at High School Yards, the Royal Oak and his flat in Nicolson St, Paddy never stopped. By day, he was a renowned academic at the University of Edinburgh, bringing hundreds if not thousands of students to Scotland to study the path of devolution. Working with Nordic Horizons, the Jimmy Reid Foundation and the Scottish Fabians amongst others, he championed the cause of local democracy, inspired by the democratic traditions of local representation in his home area in Baden-Württemberg. He authored and edited numerous volumes on Scottish and European politics and was widely respected in his field; some of the earliest books of his that I have were from the late 90s on Borders and Borderlands in Europe and the intricacies of the Schengen agreement. It is particularly tragic at this point in European history that we lose someone of his expertise.

He was, in essence, the ultimate European.

Over the past 15 years or so, Paddy was also hugely instrumental in securing the legacy of Hamish Henderson, through setting up The Carrying Stream Festival, as well as involvement with the Hamish Henderson Archive Trust, and edited numerous vital publications on Hamish with Gonzalo Mazzei and Grace Note Publications. He was kind enough to be, in the context of one of those volumes, my first publisher, so to speak.

Some of my happiest memories are the days of the Royal Oak plays back when I had time enough to spend as a regular in that real howff that was the Oak in the late 90s, where Paddy’s love of Irish literature came to the fore – not least the works of Flann O’Brien. I particularly enjoyed times with him in the Phoenix in Lauffen where he was on great form, relaxed and very much ‘daheim’.

There's plenty I've missed out - as he has done so much for so many of us, and for Scotland, und für Europa. The saddest part is not having been able to tell him just how grateful we are. Auf wiedersehen, und herzlichen Dank, mein Freund.