Each side in the Scottish independence debate agreed on one thing: that Scotland has a distinct political and intellectual heritage. That Scots can be rightly proud of the fact that their country has been home to thinkers, men like Adam Smith and David Hume, who shaped the world.
The point is that a people’s sense of identity and purpose relies on knowledge about their past, not least knowledge of their intellectual inheritance. It’s a pressing question for the north east of England. The north east doesn’t just need a political and economic make-over. It needs a re-awakening of its own, barely grasped, sense of intellectual and political heritage.
It’s easy to wander through Newcastle and not realise that this too was once a centre of bold and world-changing ideas. Part of the problem is that the boldest voices from our Northern past don’t fit comforting clichés, they weren’t landed gentry, the great and good, but nor were they simple “proto-socialists”. They were angry, odd, eccentric; utterly different from our expectations of bouffanted philosophers. 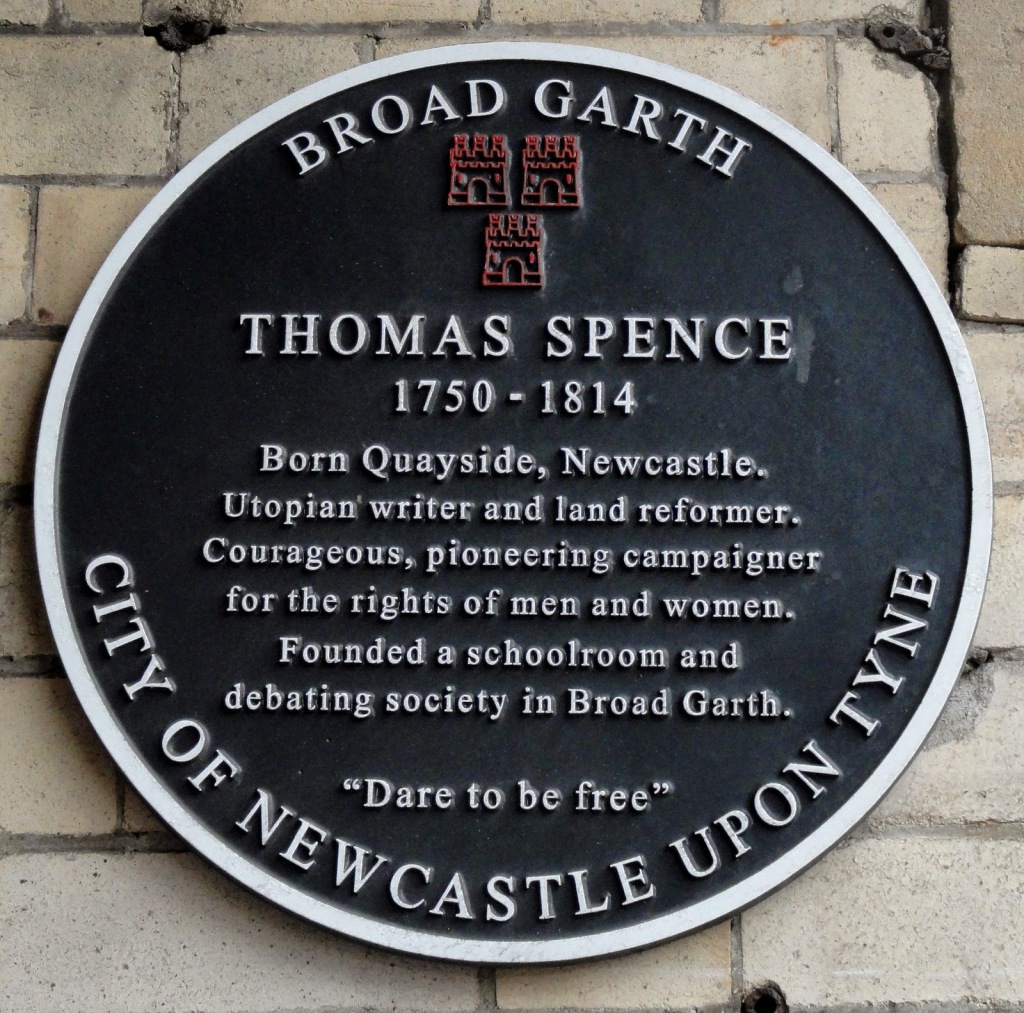 Any wander round Newcastle ends up, eventually, under Lord Grey’s patrician gaze. But it’s oddly liberating to learn that it was once proposed that his statue should be knocked to the ground, and replaced with the most stubborn and awkward of the region’s Enlightenment voices, Thomas Spence. This year, 2014, saw the two hundredth anniversary of the death of Spence, who was born on the Quayside in 1750. His is a rags-to-rags story of imprisonment and poverty. But Spence’s “Plan” for the common ownership of the land and local, democratic politics struck such a cord with ordinary people, right across England. It was seen as such a threat by the powers that be, that in 1817 “Spenceanism” became the only political ideology ever to be outlawed by the British parliament.
Spence’s insistence of localism, on the need for power to be devolved to the smallest units, touches many chords today. Our alienation from Westminster politics could scarcely be more profound. Spence offers a timely reminder of a very different vision of how democracy could work.
Plenty of Spence’s works are on the web, so take a look. He speaks to us directly because his passions are direct and plain-spoken. His insistence on children’s rights is a prime example. Spence never forgot the grinding poverty of his own childhood, and is often called the father of children’s rights (his pamphlet from 1796 “The Rights of Infants” was way ahead of its time). A conference on Spence held in honour of Toulouse in November also discussed some other achievements: he published his own dictionary using his own phonetic system; issued his own unique coinage; and was the first English person to write about “the rights of man”.
That’s right: a conference in Toulouse. Attended by scholars from across Europe. And in Newcastle? Deep silence; yawning ignorance. The poet, Keith Armstrong, and I have edited a new book, Thomas Spence: The Poor Man’s Revolutionary (published in London), to mark this extraordinary and extraordinarily overlooked story. But the story of Spence should not be seen in isolation. He was part of a wider community of thinkers in late eighteenth century Newcastle. Together they formed a Newcastle Enlightenment; although I prefer the term Northumbrian Enlightenment, since it points out that these figures worked and lived across the region. Enlightenment movements shed light on old traditions and augured a new age of rational thought. They were nearly all top-down affairs. Educated middle class and wealthy individuals were firmly in charge, handing down their wisdom to the rest of us.
The Northumbrian Enlightenment was different. While Spence developed the political values of the era Thomas Bewick took up the Enlightenment fascination with observing and accurately describing the natural world. Like Spence he was of relatively humble stock. Thomas Bewick was born in Mickley, the son of tenant farmers. Another charismatic figure, who exerted a protective influence over Spence, was a legendary preacher, the Reverend James Murray. His support for American independence had already made him a dangerous figure. This status was enshrined by his Sermons for Asses, a set of outspoken populist and radically egalitarian sermons that had a national audience.
These three men are the tip of the iceberg. Around them were writers, publishers, musicians, ministers, inventors. The north east had a distinctive and significant Enlightenment movement. It was started by ordinary people and dedicated to the betterment of ordinary people. And it’s high time that ordinary people, like you and me, knew about it.
Alastair Bonnett is professor of geography at Newcastle University. He runs a website about Thomas Spence and is the co-editor, with Keith Armstrong, of Thomas Spence: The Poor Man’s Revolutionary, published by Breviary Stuff.