ARMSTRONG IN THE NETHER REGIONS 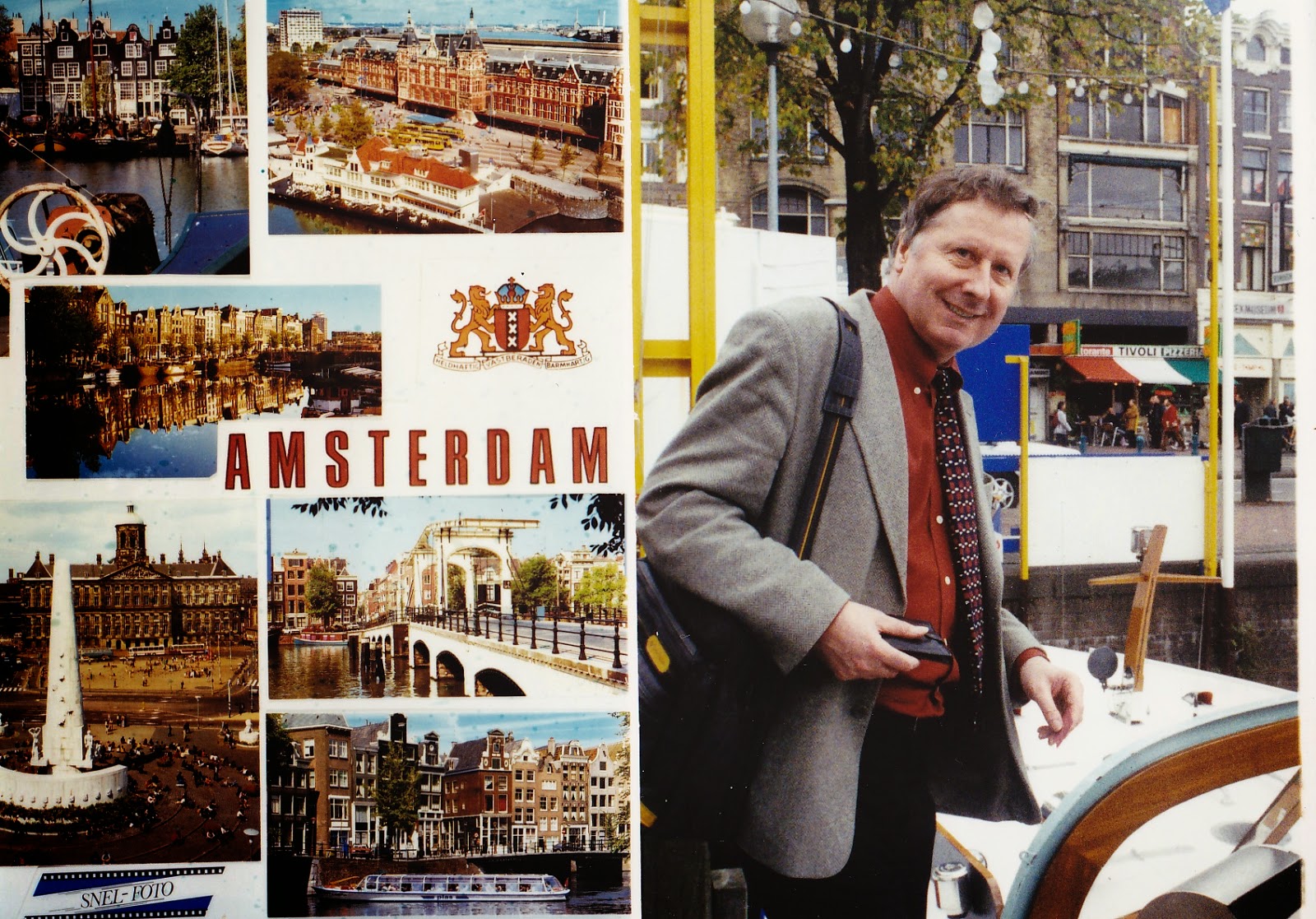 Cees Nooteboom, a leading Dutch literary light, wrote a novel translated as ‘In the Dutch Mountains’. I heard that some culture vulture sought a copy in a bookshop over here and was directed by the assistant to the TRAVEL SECTION!
I’ve travelled a lot all over The Netherlands, sometimes with the help of awards from Northern Arts/Arts Council and The British Council, and there have been times, trundling over the endlessly flat polder landscape, that I’ve been just gagging for a mountain or two.
‘Flat’, you might say, but not uninteresting if you’ve got an eye for detail - and that applies to the cultural scene as well as the landscape.
From the hectically cosmopolitan and fast talking Amsterdam to the windswept northern city of Groningen to the carnival atmosphere of Den Bosch in the south, I’ve travelled with poetry in my pocket to give a series of readings and to network madly with mad Dutch poets.
I’ve crashed down in a squat in the former Dutch Foreign Office in The Hague and read there in the basement of the ex-Intelligence Ministry. I’ve performed at three in the morning in the Cuckoo Club in Groningen where, in a sparse yet merry audience, an old hippie glared at me from a murky corner with a hamster in a cage on his knee. I’ve read in a Circus tent in Rotterdam on a Sunday afternoon accompanied by my folk-roots mates ‘The Whisky Priests’, a doped rhino eyeing us suspiciously from its cage as we unloaded our gear.
And then there was the night in Den Helder in a pub so full of drunks that even my Northumbrian Piper was heckled. That same trip, I shared the balcony of a bar with a large stuffed swan, bellowing out my poetry to the punters down below like a demented seagull. Oh and then there was the Beer Museum in Breda, crammed to the rafters with wild and drunken Brabantians on a barmy Sunday afternoon. They roared during the set by ‘The Whisky Priests’ and they roared during my poetry too, so much so that I lost my voice and had to collect it from behind the bar later.
And then there was Utrecht where I had my jacket stolen in a cafe before the gig, passport, bank card, air ticket, glasses, and all. After a visit to the Police Station, it was down to the venue where, after borrowing some reading-glasses from a member of the audience, I took the stage in fighting form. The show must go on!
In Newcastle’s twin city of Groningen, a place I’ve come to love after 20 visits or so, I performed at the Werkman College at a poetry breakfast, part of Dutch National Poetry Day, and I can recall, one wet and windy day, bumping into a pack of Friesian farmers drunk as rats. ‘And what do you do?’ bawled one in my left ear. ‘I’m a poet!’ ‘A poet!’, he mocked, ‘we milk cows!’, demonstrating, graphically, with his fingers the milking technique. Must get myself a real job I thought.
There’s a marked difference between north and south. There are carnivals down south in a warm and Catholic spirit. North seems bleaker, even gloomy, though Groningen keeps going all night, as I know to my cost. But try the Den Bosch Carnival in February, which I’ve only just returned from, and you’ll see how crazy The Netherlands can be. The symbol of Den Bosch, just over the border from Belgium, is, of course, the frog. So watch out for mobs of blokes in green tights belting out ‘When the Saints’ on their trombones. Not surprising, therefore, that it’s the home town of the legendary Hieronymus Bosch whose statue peers down on the leaping Carnival revellers, including myself.
And as for Amsterdam, well all of life is there, the nether regions bared for all to see.  One Groningen city poet told me that ‘they should bomb Amsterdam!’ Now that’s real national rivalry for you! Yet to me it has a magic - just stay a few times on a Prinsensgracht canal boat or in a mice-ridden tiny-staircased flat or in the dowdy Hotel Utopia reeking of dope, as I have done, and you’ll know what I mean. Or take a jar or two at my Amsterdam local ‘The Karpershoek’, across the street from the throbbing Central Station, and you’ll mix with typical moustached Amsterdammers and Ajax fans, as well as New York cops on holiday rubbing truncheons with re-invading German tourists, guys from Bolton in search of cheap viagra, artists chewing the latest postmodernist cud, sweaty bricklayers, and sweaty social workers - well, and the odd crazy poet too.
So you can sense that my study of Dutch culture has been pretty thorough and, of course, ongoing, with plans for me to be back there for more readings. But it’s not one way traffic - poets and musicians from Groningen have performed in Newcastle and Groningen official city poets have visited here for readings and meetings with Newcastle’s Lord Mayor, as have teachers from the Dutch city's Werkman College. Well, it’s what twinning’s all about, isn’t it?!

I was flown by a Dutchman through a Starry Sky
across the polluted Sea.
I  was twinning in a different land
with a song book in my hand.

The train tore across the frozen dykes
as the old town swarmed with bikes
and I thought of Vincent scraping spuds
and Rembrandt spitting blood.

This dark Carnival of frogs and trombones,
leaps from the graves of beggars and cripples;
this dualist fantasy,
this Oeteldonk nightmare,
where even the sewer rats dance
and the River Dieze drinks to high heaven.

I once saw a man who looked like you,
staring at me like a hag of a gargoyle
at the bar of the Bonte Palet.
He was a dribbling grotesque,
the kind you find among the monsters and workmen astride St. Jan’s.
A member, no doubt, of Our Lady’s Brotherhood,
he lived in a dream world,
a glutton for punishment,
ogling a lusty Brabant girl
with his popping, panting, eyes.
He was throwing genevers down his throbbing canal,
drinking at the confluence of Dommel and Aa;
he had brown paint on his hands so I knew it was you,
Master of Alla Prima.

You feed off tourists
on floodlit transparencies
broken by rippling houseboats.
You stay drifting in memories of the Indies;
a small piece of momentary beauty,
prettier than Amsterdam,
more shapely than Holland;
a true Swan
of the World.

In the Hotel Utopia,
we’re as happy as mortal sin.
You can hear an old man crying
through the City din.

There’s a tap that’s always dripping,
and walls that are paper-thin,
and, in this Hotel Utopia,
we’re really dreaming.