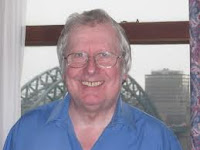 February 'On The Nail'Reading
Upstairs@Foley's Bar, Sarsfield St, Limerick(Limericks Newest Live Venue for Music and the Arts)Organised by The Limerick Writers' Centre this popular monthly reading and open-mic continues to attract audiences with a mix of poetry, prose and music.

This month (Feb) our guests are from Newcastle (UK) Dr. Keith Armstrong and Robert Lonsdale.Keith Armstrong was born in Heaton, Newcastle upon Tyne, where he has worked as a community development worker, poet, librarian and publisher he is coordinator of the Northern Voices creative writing and community publishing project which specialises in recording the experiences of people in the North East of England. He was awarded a doctorate in 2007 for his work on Newcastle writer Jack Common at the University of Durham where he received a BA Honours Degree in Sociology in 1995 and Masters Degree in 1998 for his studies on regional culture in the North East of England.Though a regionalist inspired by the landscape of his birth and its folk and musical traditions, he is very much a European and his work is much influenced by writers such as Hoelderlin, Hesse, Brecht, Baudelaire, Prevert, Esenin, and Mayakovsky.

Robert Lonsdale is a poet, publisher and broadcaster. He has written, produced and directed two short films called, "For Those Who Sit And Wait"  and "Ya Joking Aren't Ya ?", both of which have been featured in many short film festivalsncluding Teesside University’s “Concept" film night. His latest work is an hour long television drama called “The Let" whichhe has just submitted to the B.B.C.
Everyone is invited to take part in the open-mic after the main event, poets, storytellers, musicians and writers . Even if you don't write you are welcome to bring something along to read. The night begins at 8.00pm and admission is free. So join us on the night and make this event something special.
NOTE: Our special authors book table will again be in operation, so if you want your book, CD's etc publicised make sure you are represented on the table. Contact Dominic Taylor at 087 2996409 to make arrangements.