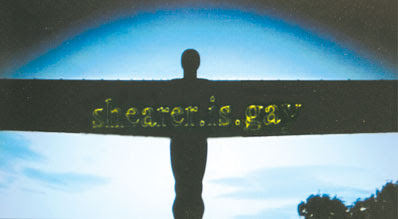 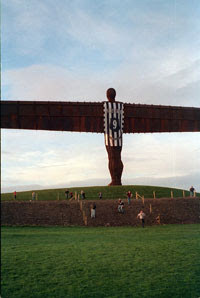 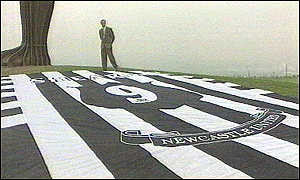 ANGELS PLAYING FOOTBALL
Some weeks before he died in 1988, the legendary Newcastle United footballer Jackie Milburn was sitting in his Ashington home with a grand-daughter on his knee. Outside, there was thunder and lightning, which frightened the wee girl: ‘What’s that noise?’, she asked her grandad anxiously. ‘Don’t worry’, ‘Wor Jackie’ replied, ‘It’s just the angels playing football.’
It was this incident which inspired the following poem, given added poignancy by the placing of an Alan Shearer shirt on the notorious Gateshead Angel’s prodigious back by local fans before the 1998 F.A. Cup Final!

Sprinkle my ashes on St. James’s Park,
Fragments of goals on the grass.
Hear the Gallowgate roar in the dark.
All of my dreams came to pass.

Pass me my memories,
Pass me the days,
Pass me a ball and I’ll play:

Play with the angels,
Play on their wings,
Play in the thunder and lightning.

Pass me my memories,
Pass me the days,
Pass me a ball and I’ll play:

Play with the angels,
Play on their wings,
Play in the thunder and lightning.

'Trouble with the Angel is that it's a monument to Gormley's vanity as much as anything else. A hell of a lot of his work is based on his own body, and not specific to the location, its history or heritage: witness his skyline statues (of himself, naturally) all over central London and very similar statues on Crosby beach. Must be nice to get oodles of public money to put statues of oneself all over the landscape. He is hugely overrated and has a ridiculous sense of his own importance, indeed a disturbing degree of egocentricity, as evidenced by his offensive and witless comment that winning the Turner prize in 1994 made him feel like a 'Holocaust survivor'.' 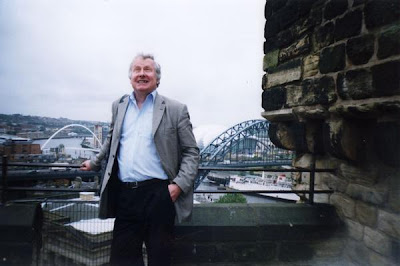 Keith Armstrong was born & bred in Heaton, Newcastle upon Tyne, where he has worked as a community development worker, poet, librarian & publisher. As an industrial librarian at I.R.D. in Newcastle, he was christened 'Arts & Darts', organising an events programme in the firm including poetry readings, theatrical productions, & art exhibitions by his fellow workers, as well as launching Ostrich poetry magazine using the firm's copying facilities & arranging darts matches between departments!
This selection of his poems on his beloved home city reveals both its sunny and dark sides.

Keith is a noted Geordie wordsmith, a bloke whose musings were always radical, though of their place. (Folk Roots magazine).

In another part of the field, another field, let's face it, sits Keith Armstrong's rakish gaff. (His)poems are rooted in the Tyneside music-hall tradition, closely behind which was the august balladry of the Borders. Throughout the collection, the authentic lyrical note of this northern poet is struck. (Michael Standen, Other Poetry).