A TOAST TO THOMAS SPENCE!

IT'S THE BIRTHDAY OF NEWCASTLE RADICAL THOMAS SPENCE (1750-1814) ON TUESDAY JUNE 21ST.
SPARE A THOUGHT FOR HIM IN HIS HONOUR, VISIT THE NEWLY INSTALLED PLAQUE IN BROAD GARTH, QUAYSIDE, NEWCASTLE AND READ SOME OF HIS UNIQUE WRITINGS.
'In 1793 Spence was imprisoned three times. Then in May 1794 he was one of twelve London radicals arrested. Charged with 'treasonable practices', he lingered in Newgate for several months without trial. So alarmed were the respectable members of the Newcastle Lit and Phil that they sent a statement to the Annual Register and the Gentleman's Magazine disclaiming any connection with the original Philosophical Society, where Spence had given his notorious lecture, and stated as their fundamental rule 'that Religion, British Politics, and all Politics of the Day, shall be deemed prohibited Subjects of Discussion.' 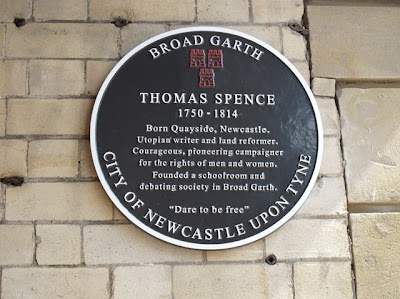 THE HIVE OF LIBERTY
THE LIFE & WORK OF THOMAS SPENCE (1750-1814)
Edited by Keith Armstrong, with an introduction by Professor Joan Beal and a new essay by Professor Malcolm Chase
Published with the support of Awards For All and the Lipman-Miliband Trust
Soon after Spence moved to London, Thomas Bewick’s brother John wrote home that Spence was ‘as full of his Coally Tyne Poetry as ever’.
This reprint is a celebration of that noted pioneer of people’s rights, pampleteer and poet Thomas Spence, born on Newcastle’s Quayside in turbulent times.
Spence served in his father’s netmaking trade from the age of ten but went on later to be a teacher at Haydon Bridge Free Grammar School and at St. Ann’s Church in Byker under the City Corporation. In 1775, he read his famous lecture on the right to property in land to the Newcastle Philosophical Society, who voted his expulsion at their next meeting. He claimed to have invented the phrase ‘The Rights of Man’ and chalked it in the caves at Marsden Rocks in South Shields in honour of the working-class hero ‘Blaster Jack’ who lived there.
Spence even came to blows with famed Tyneside wood-engraver Thomas Bewick (to whom a memorial has been recently established on the streets of Newcastle) over a political issue, and was thrashed with cudgels for his trouble.
From 1792, having moved to London, he took part in radical agitations, particularly against the war with France. He was arrested several times for selling his own and other seditious books and was imprisoned for six months without trial in 1794, and sentenced to three years for his Restorer of Society to its Natural State in 1801. Whilst politicians such as Edmund Burke saw the mass of people as the ‘Swinish Multitude’, Spence saw creative potential in everybody and broadcast his ideas in the periodical Pigs’ Meat.
He had a stall in London’s Chancery Lane, where he sold books and saloup, and later set up a small shop called The Hive of Liberty in Holborn.
He died in poverty ‘leaving nothing to his friends but an injunction to promote his Plan and the remembrance of his inflexible integrity’.
The Thomas Spence Trust has successfully campaigned for a commemorative plaque on the Quayside in Newcastle. It was unveiled on 21st June 2010, Spence's 260th birthday, with a number of talks, displays and events coinciding with it.
Newcastle City Council has endorsed the Trust and Commissions North allocated £1000 as a seeding grant.
PRICE £5

to the brilliant keith!