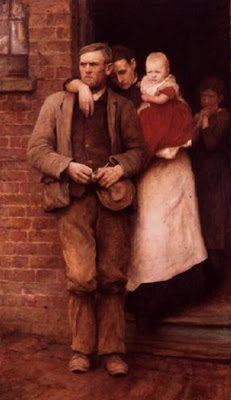 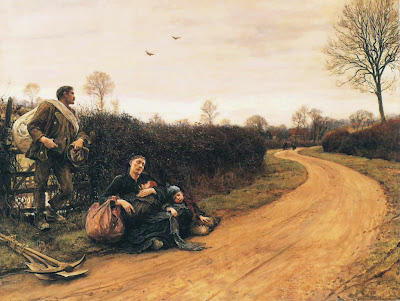 Hubert von Herkomer (26 May 1849 – 31 March 1914), British painter of German descent. He was also a pioneering film-director and a composer.


Herkomer was born at Waal in Bavaria. Lorenz Herkomer, his father and a wood-carver of great ability, left Bavaria in 1851 with his wife and child for the United States, settling in Cleveland, Ohio, for a while, but returned to Europe and settled in Southampton in 1857.

He lived for some time at Southampton and in the school of art there began his art training; he visited Bavaria with his father in 1865 and briefly studied at the Munich academy, but in 1866 he entered upon a more serious course of study at the South Kensington Schools, and in 1869 exhibited for the first time at the Royal Academy.

In same year, he also began working as an artist for the newly-founded newspaper The Graphic. It was by his 1875 oil, The Last Muster, after a woodblock from 1871, that he definitely established his position as an artist of high distinction at the Academy . He was elected an associate of the Academy in 1879, and academician in 1890; an associate of the Royal Society of Painters in Water Colours in 1893, and a full member in 1894; and in 1885 he was appointed Slade professor at Oxford, a position which he held until 1894.

In 1896 he was knighted by Queen Victoria, and in 1899 awarded Pour le Mérite by Kaiser Wilhelm II.

He exhibited a very large number of memorable portraits, figure subjects and landscapes, in oil and watercolour; he achieved marked success as a worker in enamel, as an etcher, mezzotint engraver and illustrative draughtsman; and he exercised wide influence upon art education by means of the Herkomer School (Incorporated), at Bushey, which he founded in 1883 and directed without payment until 1904, when he retired. It was then voluntarily wound up, and is now defunct.

Despite being a prominent member of Royal Academy, Royal Water-Colour Society and the Royal Engravers, as well as being on familiar terms with the royal family, Herkomer was never totally accepted by the British establishment: He was ultimately a victim of the deteriorating relationship between Great Britain and Germany, where he shuttled in between, spending most of his summers in Bavaria.

Herkomer's massive house, Lululaund, named after Lulu Griffith, second of his three wives, served as his studio, school, theatre and movie studio, where he put on productions of his own plays and musical compositions.

Four of his pictures, Found (1885), Sir Henry Tate (1897), Portrait of Lady Tate (1899) and The Council of the Royal Academy (1908), are in the Tate Collection. In 1907, he received the honorary degree of DCL at Oxford, and a knighthood was conferred upon him by the king in addition to the commandership of the Royal Victorian Order with which he was already decorated.

Herkomer was also a pioneering film maker. He established a studio in Lululaund and directed some seven historical costume dramas, designed to be shown accompanied by his own music. None of them seems to be preserved.

Herkomer died at Budleigh Salterton on 31 March 1914 and was buried in St James's Church, Bushey.

The largest collection of his work is held by Bushey Museum, England, and some is in the Herkomer Museum, Landsberg am Lech, Germany.
Posted by keith armstrong at 1:01 pm
Newer Post Older Post Home