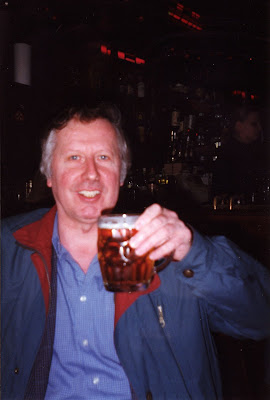 He has served on the Executive Committee of the
Federation of Worker Writers & Community Publishers
and he is a committee member of the North East of
England Labour History Society.
He qualified as a Chartered Librarian at Newcastle
Polytechnic and was employed in this field at
Newcastle University Library, Blyth Public Library,
International Research and Development Company
(I.R.D.,Newcastle), Merz & McLellan Consulting
Engineers (Killingworth), Gateshead College and
Sunderland Libraries, before becoming a community
worker with Newcastle Neighbourhood Projects (part of
Community Projects Foundation), research worker with
Tyneside Housing Aid Centre, and then Community Arts
Development Worker (1980-6) with Peterlee Community
Arts (later East Durham Community Arts).

As an industrial librarian at I.R.D., he was
christened 'Arts & Darts' , organising an events
programme in the firm incuding poetry readings,
theatrical productions, and art exhibitions by his
fellow workers, as well as launching Ostrich poetry
magazine using the firm's copying facilities and
arranging darts matches between departments!
He has been a self-employed writer since 1986 and he
was awarded a doctorate in 2007 for his work on
Newcastle writer Jack Common at the University of
Durham where he received a BA Honours Degree in
Sociology in 1995 and Masters Degree in 1998 for his
studies on regional culture in the North East of
England. He was Year of the Artist 2000
poet-in-residence at Hexham Races, working with
painter Kathleen Sisterson. He has also held
residencies in Durham, Easington, Sedgefield,
Derwentside, Teesdale, Wear Valley, Chester-le-Street
and Sunderland.

His poetry has been extensively published in magazines
such as New Statesman, Poetry Review, Dream Catcher,
Other Poetry, Aesthetica, Iron, Salzburg Poetry
Review, Sand, X Magazine, The Poetry Business, and
Poetry Scotland, as well as in the collections The
Jingling Geordie, Dreaming North (with Graeme Rigby),
Pains of Class and Imagined Corners, on cassette, LP &
CD, and on radio & TV. He has also written for
music-theatre productions, including ‘O’er the Hills’
(with Dreaming North - Graeme Rigby, Rick Taylor,
Paul Flush, Joan McKay and Keith Morris, with guest
Kathryn Tickell,) and ‘Wor Jackie’ (with Mike Kirkup)
(1988) for Northumberland Theatre Company; ‘Pig’s
Meat’ (1997 & 2000) for Bruvvers Theatre Company; and
‘The Roker Roar’ (1998) for Monkwearmouth Youth
Theatre Company. Other commissioned work includes
‘Fire & Brimstone’ (with Linda France, Paul Flush and
others) (1989) and ‘The Hexham Celebration’ (with Paul
Flush and others) (1992), both for the Hexham Abbey
Festival; ‘Suite for the River Wear’ (with Dreaming
North) (1989) for BBC Radio; and ‘The Little Count’
(with Andy Jackson and Benny Graham) (1993) for Durham
County Council. He won the Kate Collingwood Bursary
Award in 1986. He was the Judge for the Sid Chaplin
Short Story Awards in 2000. In 2010 he appeared on BBC
Radio 4 as part of a documentary on the Tyne Bridge.

He has performed his poetry on several occasions at
the Edinburgh Fringe Festival and at Festivals in
Aberdeen, Bradford, Cardiff, Cheltenham (twice at the
Festival of Literature - with Liz Lochhead and with
'Sounds North'), Durham, Newcastle upon Tyne,
Greenwich, Lancaster, and throughout the land.
He has read in Newcastle at the Morden Tower,
Swarley's Club, The Blue Room & The Baltic, at
Durham's Colpitts Poetry, Tees Valley's Write Around &
Writers' Cafe, Leed's Wicked Words, York's Riverlines,
Lincoln's Spoken Word, Liverpool's Stamps, Sheffield's
Antics, Bradford's Grey Sheep Cabaret, Aberdeen's
Springtides, London's Apples & Snakes, at the Universities
of Bath, Durham, Newcastle and Warwick, in Edinburgh
at the Scottish Poetry Library and the Royal Oak
and Diggers venues and in Limerick at The White House.
He has received an Arts Council of Northern Ireland
grant to visit Belfast and Northern Cultural Skills
Partnership grants to attend conferences in Bath,
Leeds and London.

In his youth, he travelled to Paris to seek out the
grave of poet Charles Baudelaire and he has been
making cultural pilgrimages abroad ever since. He has
toured to Russia, Georgia, Bulgaria, Poland, Iceland
(including readings with Peter Mortimer during the Cod
War), Denmark, France, Germany (including readings at
the Universities of Hamburg, Kiel, Oldenburg, Trier
and Tuebingen), Hungary, Italy, Ireland, Isle of Man, Spain,
Sweden, Czech Republic, The Netherlands, the United
States, Cuba, Jamaica and Kenya.
His poetry has been translated into Dutch, German,
Russian, Italian, Icelandic and Czech.

He has long pioneered cultural exchanges with Durham’s
twinning partners, particularly Tuebingen and
Nordenham in Germany and Ivry-sur-Seine and Amiens in
France, as well as with Newcastle’s Dutch twin-city of
Groningen. In fact, he has visited Tuebingen over 30
times since he first spent a month there in November
1987 as poet-in-residence supported by Durham County
Council and the Kulturamt, and he has performed his
poetry in the city’s Hoelderlin Tower and, on three
occasions, as part of the annual Book Festival. He has
arranged for writers such as Katrina Porteous, Julia
Darling, Michael Standen, Alan C. Brown and Linda
France to join him in Tuebingen.
He has also won Northern Arts Awards to visit Berlin, Holland
and Prague (with poet Paul Summers). His travels to Denmark,
Germany, Holland and Sweden have also been supported by the
British Council.
By way of cultural exchange, he has arranged for
visits to North East England by poets from Scotland, Ireland,
Germany, The Netherlands, the Czech Republic, America
and Russia.

He often works and travels with folk-musicians from
North East England, including Jez Lowe, Marie Little,
Gary Miller and George Welch, and he has written the
lyrics for an album, 'Bleeding Sketches', by folk-rock
band ‘The Whisky Priests’, with whom he has toured
extensively in The Netherlands. He has also visited
the European Parliament in Strasbourg to perform his
poetry with musicians Pete Challoner and Ian Carr. He
has recently inspired songs by Jez Lowe and by Joseph
Porter of Blyth Power.

With the support of Arts Council England,
North Tyneside Council and Northumberland Coast Area
of Outstanding Natural Beauty, he recently worked with Berlin
artist Rolf Wojciechowski on a text sculpture which
involved readings on the beaches along the
Northumbrian coast from Marsden to Cullercoats and
from Druridge Bay to Berwick.

Though a regionalist inspired by the landscape of his
birth and its folk and musical traditions, he is very
much a European and his work is much influenced by
writers such as Hoelderlin, Hesse, Brecht, Baudelaire,
Prevert, Esenin, and Mayakovsky.
Posted by keith armstrong at 8:23 am
Newer Post Older Post Home