The Bismarck Tower in Tübingen 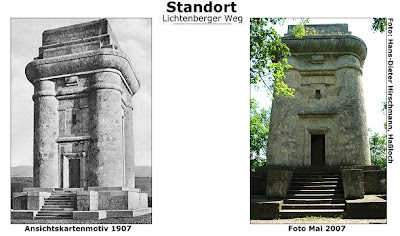 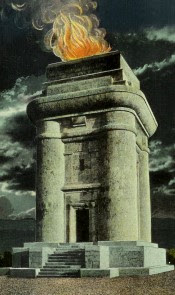 Tuebingen students suggested, in January 1900, the construction of the Bismarck Tower. A memorial committee was formed, chaired by Professors Dr. Schleich and Dr. Frank. The committee chose the winning design "Gotterdammerung" by architect Wilhelm Kreis. The City of Tuebingen provided the building site (the highest point on the Schlossberg) free of charge.

The students had for some years had a special relationship to the Schlossberg and they had honoured the Empire in 1871 at 18.01 and annually organized a torchlight procession to the castle hill and lit a fire.

The work was carried out by government architect Franz Baertle from Tuebingen. The 16-metre high tower consists of tuff and coarse-grained sandstone. Inside, there was originally a wooden staircase leading to a platform. The wooden staircase was reopened in 1969, with the last 12 steps of the 63 steps made of steel. The Bismarck Tower remained, in spite of these remedial measures, at least until September 1971, not climbable for visitors.

On the top platform, a fire bowl was featured. Through vandalism and several fires, the tower remained closed until early November 1999.

In 1999, a Tuebingen couple donated the entire cost of the restoration of the tower in the amount of 64,000 DM to enable the Tower to be renovated and made accessible again. On 14.11.1999 it was officially reopened. The fire bowl was removed during the renovation. A sign on the left side of the entrance indicates that the tower was renovated by the Tubingen Cultural Foundation with the donation of the Tübingen couple.

Opening times:
In summer, the Tower is open all day on weekends, otherwise the key can be borrowed from the Tourist Office in Tuebingen.
Posted by keith armstrong at 5:40 pm
Newer Post Older Post Home